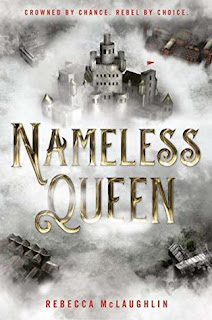 One girl must make a name for herself--or die trying --in this royal fantasy where an unknown peasant becomes the ultimate ruler. But how long can she keep the crown if everyone wants her dead? Perfect for fans of Furyborn, Red Queen, and Everless.

It shouldn't even be possible. I'm Nameless, a class of citizens so disrespected, we don't even get names. Heck, dozens of us have been going missing for months and no one seems to care.

But there's no denying the tattoo emblazoned on my arm. I am queen. In a palace where the corridors are more dangerous the streets, though, how could I possibly rule? And what will become of the Nameless if I don't?


NAMELESS QUEEN fell in the middle for me. I enjoyed the overall storyline and the characters, but it was lacking the depth that I was looking for.

I enjoyed the characters. There was a wide array of characters in NAMELESS QUEEN. I liked that they found stuff in common even with their varied backgrounds and were able to work together to achieve their overall goals. The pacing was good, I never found myself bored.

The world building is very basic. We get small tidbits of things, but no real details. Nothing really shocked me in NAMELESS QUEEN. There was a bit of mystery as how Coin got to be in her new position, but I guessed it before it was revealed.

I don't regret reading NAMELESS QUEEN and would probably read more in this world if the author ever decided to delve further in.