UFI welcomes Author Genevieve Jack. Thanks for Joining us!!


Thank you to the hosts at Urban Fantasy Investigations. I’m Genevieve Jack, here today to celebrate the release of Vice, Fireborn Wolves book 1. Vice is all about the dichotomy between being a strong, independent woman and the deep, almost animal need we have to enter into a relationship with the opposite sex, a relationship that often leaves us vulnerable. As an author, I like to explore the human condition, our idealistic worldviews and how they clash with reality, and the attitudes that make us who we are. Here are five other books I recommend that touch on similar themes.

A Man Called Ove by Fredrick Bachman
Fredrick Bachman’s masterpiece of a novel explores what it’s like to be closer to the end of things than the beginning. Ove is the old-man-down-the-street who drives everyone crazy but also serves an underestimated purpose. Read this one when you want to feel good about living on this planet again.

The Black Dagger Brotherhood Series by JR. Ward
Each of the brothers suffers from a condition that requires them to rise above their circumstances. Be it blindness, a curse, a handicap, or a physical deformity, JR writes heroes who are tough on the outside but soft at heart. All of her books will take you to a place of true love where, thankfully, real men (or vampires) can also be vulnerable.

Bossypants by Tina FeyWhat’s it like to be a woman blazing her own trail in comedy and in life? This book has lots to say about feminism and self-empowerment. It’s also hysterical. If at all possible, pick up the audiobook; there is nothing like hearing it in the author’s voice.
Where’d you go Bernadette by Maria SempleA hilarious look at a middle-aged woman’s psychological break through the eyes of the people around her. I found some serious truths between the lines of this novel about the sacrifices we make for the people we love, the reality of the business of art, and a woman’s role in the family. Beyond that, the epistolary approach Semple took to telling this story was pure genius.
Outlander by Diane Gabaldon
The entire series is fabulous but what makes this first book especially interesting to me is that you have an author writing a novel in the late 1980’s (originally published in 1991) about a WWII nurse who travels back in time to mid-18th century Scotland. With our evolved lens of 2016, we get to experience the thoughts and feelings of women living in three different eras. I love talking about these books with friends, some of whom can’t believe some of the scenes—which today might need a trigger warning—weren’t cut from the novel. Thankfully, we have true, unadulterated art in these novels, a gritty look at love, time, and the ties that bind us.

Genevieve Jack is a registered nurse turned author of weird, witty, and wicked-hot paranormal romance. Coffee and wine are her biofuel: the love lives of vampires, shifters, and witches her favorite topic of conversation. She harbors a passion for old cemeteries and ghost tours thanks to her years at a high school rumored to be haunted. Although she calls the Midwest home, her heart belongs to the beaches of the southeast, where she spends her days with her laptop and one lazy dog. 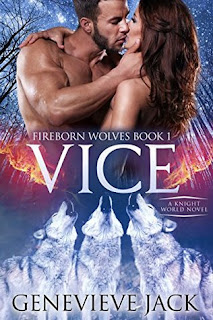 
Some cravings can't be denied.

Werewolf Laina Flynn longs to break from the patriarchal expectations of Fireborn pack. A successful entrepreneur, she doesn't have time to be bossed around by her alpha brother, Silas, let alone to act as a proper werewolf princess.

But when a wolf is found murdered on Fireborn shifting grounds, Laina will do anything to protect her pack, even if it means posing as a waitress at a club that flies in the face of her feminist ideals. Unfortunately, her inner wolf marks the club's owner, Kyle "The King" Kingsley, as her vice--her metaphysical addiction. He becomes a hunger she can't ignore...one that could threaten her life, her family, and her pack.