Review: Kiss of the Royal by Lindsey Duga (@LindseyDuga, @EntangledTeen) 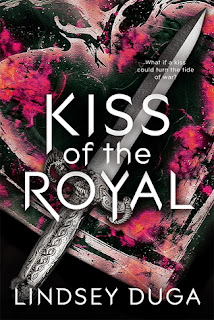 In the war against the Forces of Darkness, the Royals are losing. Princess Ivy is determined to end this centuries-long conflict once and for all, so her new battle partner must succeed where the others failed. Prince Zach’s unparalleled skill with a sword, enhanced by Ivy’s magic Kiss, should make them an unstoppable pair—but try convincing Zach of that.

Prince Zach has spent his life preparing for battle, but he would rather be branded a heretic than use his lips as nothing more than a way to transfer magic. A kiss is a symbol of love, and love is the most powerful weapon they have—but try convincing Ivy of that.

With the fate of their world on the line, the battlefield has become a testing ground, and only one of them can be right. Falling for each other wasn’t part of the plan—but try convincing their hearts of that.


Going into KISS OF THE ROYAL I thought it was going to be a little cheesy, but wanted to give it a shot anyways. It started out a little iffy, but it didn't take me long to get into the story.

Princess Ivy was likable. I enjoyed being in her head as she battled her own thoughts and *gasp* feelings. Prince Zach was mysterious and a bit guarded at first. I didn't always know what he was thinking, but I quickly started to trust that he did everything with his whole heart. It was interesting to watch both Zach and Ivy navigate their situation with their different beliefs raging against each other.

Even though I enjoyed it, I was a tad bit disappointed when I finished reading KISS OF THE ROYAL. I would have loved to see some more depth involved in the big battle. There was a lot of lead-up to it, but I thought it went way too fast. On top of that, I kinda wanted to know more. I wanted to see the struggles that Ivy and Zach went through once the battle was over and before the end. I want to see what their future looks like, I want to see it all.