Guest Blog: A Soul to Take by Emily Taylor

When deciding what genre A Soul to Take fell into, I had quite a bit of difficulty. There were so many genres I could choose from and I found myself tossing up between the big headliners and the sub-genres.

At first I was going with Steampunk. I had originally imagined this world full of quirky devices and clothing, and I’ve always wanted to try my hand at this genre. Except it didn’t turn out like that. Instead of building this world full of steam-powered machinery—wiki’s definition of steampunk—I had this fusion between old and contemporary ways.

I had advance technology casually integrated into everyday life, and yet choose to style the world with Victorian fashion and architecture, with a modern spin. There are also hierarchies in both the human and demon political world, though quite different versions.

So, what do you call this mash-up of a world?
An equally mashed up genre: Urban Paranormal.

So what is this?

Urban means set in a modern ‘city’ environment. This place—like my world and style of writing—is usually dark, and not shy of details. It focuses on the ‘under workings’ of the city, and can also have historical or futuristic elements.

So check. I had Urban.

But was I Fantasy or Paranormal?

Fantasy stories, in my opinion, are classic. They don’t have to be ‘epic’ but must contain magic and/or traditional mythical creatures, or ones you have created in the same style—dragons, elves etc. without any real twists. They also have to be set in a world unlike our own, with exception, but in general. They are also usually written in third person.

Urban Fantasy—kind of like the opposite of epic fantasy-- on the other hand is slightly different and akin to Paranormal. We still have those traditional elements, but have taken them out of a different world, and placed them in one closer to our own. A great example is one of my favorite series, Kate Daniels by Illona Andrews. Her world is similar to our Earth, but different.

Magic and Technology fight against each other in ‘waves’—one minute technology will be working, then it’ll crash as magic takes over for the next wave that could last from minutes to hours. Her world also contains classic mythical creatures such as vampires and werewolves. She even has necromancy! (Am I fan-girling yet? hahah)

So what is the difference between that, and Paranormal?

Well, actually three, but bare with me.

Romance: Many believe Urban Fantasy stories follow plots that just happen to have romance. It is the byproduct of the events—not the main theme. While on the other hand Paranormal (aka. Paranormal Romance), is the ‘Happily Ever After’ nine times out of ten. This is usually the end goal.

Magic: Paranormal books don’t have it. What it does have, as Wikipedia kindly explains, is themes from traditional fantasy (the supernatural), science fiction, and/or horror. For an example, if we look at Twilight (just because everyone knows it), the vampires are the supernatural element—but not exactly magic. If we were to suddenly take the vampires out of the world—it’d just be the same as ours. While in contrast, if we take the vampires and other creatures out of Illona Andrew’s world—there is still this awesome, alternating waves of magic and technology bashing it out.
Still with me?

So why did I choose Paranormal for my story?

Well, in truth, it could go either way. Actually the difference between Urban Fantasy and Paranormal is so easily arguable, it often doesn’t matter. Most authors use it interchangeably anyway.

But for me, I go with Paranormal for a few reasons. We have the fact it’s written in first person. So tick there. But my main character’s goal isn’t love… It kind of gets there in the end, but it’s her wanting to save her sister that drives story. So that one could go either way.

Then we have my Demons. They aren’t traditional, let’s put it that way. Instead they are a creation of supernatural forces with “scientific” backing (don’t worry, it’s explained in the book). So while their ‘powers’ could push fantasy—I’m going with paranormal.

And finally, I like horror. I can’t help it. Things just get dark and out of control quickly in my worlds—so heads up.

This is one of the main things I think separates fantasy from paranormal apart from the romance and magic; maybe because it resonates with me. So, that’s the third thing.

Horror: When I think fantasy, I think light. Fantasy can get intense, don’t me wrong—I’m a huge lover—but there is something pure about it, and surreal in its magic. While in contrast, when I think paranormal, I think dark and gritty.


That’s just for me personally though.

Besides writing, Emily Taylor currently studies Music Technology at her state’s Conservatorium and recently helped on Respect Cat Production’s feature film, In a Corner, as a Script Advisor.  After great success on InkPop and Figment, A Soul to Take is her first formally published work. 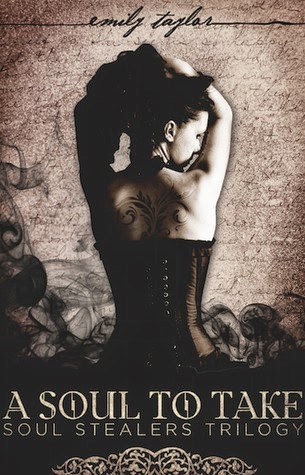 A Soul to Take
Soul Stealers #1


Dying is the least of Elixia’s worries.

The world has changed. Demons are no longer legend, but part of life, integrated into our society . . . or so the Government claims. Things are never that simple, though, and neither side favors the new union. Agent Elixia Albelin knows the dark nature of demons firsthand, and will do everything in her power to protect the innocent from their wrath.

But when a mission from the Agency goes sour, Elixia finds herself in a predicament. Murdered, with her last living family-member kidnapped, her only hope is an offer from the very thing she despises: a demon. It’s no ordinary demon offering the contract, though, and his motive for such a deal is unclear. But if she's to discover the truth and save her sister, she must commit the greatest taboo for an Agent:

Now, Marked and shackled to the terms of the contract, she must try to uncover the mystery of her sister's abduction before her new "owner" comes to claim what is his. Her past may hold answers, but what happens when her investigation finds something far more sinister? Something not even the demons can condone?