Review: Deja Who by MaryJanice Davidson 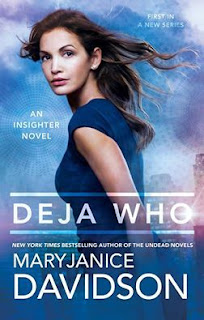 
Leah Nazir is an Insighter. Reincarnation is her business. But while her clients' pasts are a mess, Leah's is nothing short of tragedy. She's been murdered. A lot. If left to that bitch, destiny, it'll happen again. Leah wants to know who's been following her through time, and who's been stalking her in the present...

P.I. Archer Drake has been hired by Leah's mother to keep an eye on her. But the more time he spends watching, the more he finds himself infatuated. Before long, he even finds himself agreeing to help find the person who wants her dead. Over and over again.

Now going full-on "rewind," Leah hopes it can stave off the inevitable. After all, she's grown fond of this life - and even fonder of nerdy Archer. But changing her pattern means finding out who her killer is today. And as Leah fears, that could be anyone she has come to know and trust. Anyone.

I have been thinking a lot about DEJA WHO since I finished reading it. Not because I loved it and it stuck with me, but because I had NO clue what to say about it. Did I like it? Well, I didn't hate it, but I didn't really fall into it either. It just kind of was.

When I read the blurb for DEJA WHO the first thing I thought was, "Wow, that's different. What a neat concept." When I started reading DEJA WHO all I thought was "What?!?!" I was completely lost in the first chapter until I got the hang of how the story was being told. On top of that I had a hard time wanting to read more in the beginning because some of the past stories of Leah's patients were really slow and downright boring. I thought a lot of that could have been left out if I'm being honest. I don't think it added anything to the story and like I said, it was boring.

By now you might be asking what I liked about DEJA WHO. I honestly am having a hard time saying. Like I said before, I didn't hate it and I was able to finish it. The characters had some flaws—ok they had a lot of flaws—but I did find them interesting. The story line was unique with some funny and eccentric moments, but I didn't love the flow and I thought there was a lot of nonsense thrown in. The big mystery of who Leah's killer was going to be kept the suspense up, but when it came to the reveal, I was less than impressed.

Will I read another installment of the Insighter series? Something in the blurb would really need to grab me.