UFI welcomes Lynda Hilburn Author of  The Vampire Shrink. Thanks for Joining us!!

Thanks so much for having me here today!

My series, Kismet Knight, Vampire Psychologist, is mostly about vampires, but it also features wizards, ghosts, psychics and witches. So, when I was trying to come up with a topic for this blog post, I decided it might be fun to share a few of my favorite witchy movies. There are good witchy TV shows, too, but that’s another post.

I’m a Harry Potter fan and appreciate the witches and wizards in his world, but I’m not going to include those movies in my list today, for the sake of brevity.

This movie changed my life. I know. That sounds melodramatic, but it’s true. My family was very poor when I was a child, and we rarely went to the movies. How I managed to see this film is still a mystery to me. But after I saw it, my personal weirdnesses – er, idiosyncrasies, rather – made a lot more sense to me. My imagination exploded. Kim Novak and her familiar, Pyewacket, opened the door to an amazing occult wonderland. I’ve never forgotten the tune Kim hummed to the cat while spellcasting. Okay. If I were making the movie today, I’d change the part where she loses her abilities because she falls in love – classic 1950s morality – but besides that, it’s wonderful. All the witches
are playfully powerful. This movie is directly responsible for my obsession about moving to New York City as soon as I could (I visited, but didn’t stay. Another long story.)

The scene where Cher, Michele Pfeiffer and Susan Sarandon drink wine, eat junk food, and fantasize about meeting a mysterious, extraordinary man has to resonate with most unattached women. I’ve definitely been there and done that. The three of them aren’t conscious of their individual abilities until their combined powers become obvious. I’ve met lots of unaware witches in my life. It reminded me of all the sleepovers I did as a little girl, where we played with the Ouija board and raised each other up off the ground using only our fingertips. Magic was an everyday occurrence then. This movie still holds up for me and I can even smile at the big hair. Nobody does an unrepentant demon better than Jack Nicholson.


Juliette Binoche does a great job of portraying a witch who stirs her magic into various forms of chocolate. I especially like the fact that she’s a counseling witch – she spends more time listening to the problems of the people in the small, repressed town than doing anything else. Of course, I can relate to that! Add in Johnny Depp, and this is truly an excellent film.

I like this movie mostly because of the Aunt characters played by Stockard Channing and Dianne Wiest. The idea of generations of witches living in an excellent old house in a New England, oceanfront town is appealing. It’s fun watching the women and girls practice their art in the kitchen, especially when the townswomen join them. Bringing the bad guy back to life was a nice touch. All in all a sweet, magical romance.

Marion Zimmer Bradley’s feminist reimagining of the Arthurian legend is filled with powerful women, many of whom hold to the “old ways” of Goddess worship and ritual magic. The book was so wonderful it was almost impossible for the movie to live up to the lofty standard, but I enjoy watching it. It makes me wonder what it would be like to live in a world where the feminine is revered and celebrated.

I had a copy of this old film on video, but the tape broke, so I need to get a DVD. Funny old tale of a naughty witch, her trouble-making father, and a hapless human male.

You’re probably thinking, “doesn’t this woman like any films made in the last century – er, decade?” Yes, I like parts of them. I like portions of “The Craft,” “The Crucible,” and many others. You should see my collection of vampire movies . . .

I sometimes feel as if I’ve already lived several lifetimes in the years I’ve inhabited this body. I’ve been able to create outlets for all my varied interests and abilities. So far, I’ve been a rock-and-roll singer/musician, a typesetter/copy editor for various newspapers and magazines, a professional psychic/tarot reader, a licensed psychotherapist, a certified clinical hypnotherapist, a newspaper columnist, a university instructor, a workshop presenter and a fiction writer.

During many of those years, I was also a single mom.

After a childhood filled with invisible friends, sightings of dead relatives and a fascination with the occult, turning to the paranormal was a no-brainer.

Since switching from writing nonfiction to fiction in 2004, I’ve had a wonderful time creating stories about my favorite paranormal characters. I’ve been a rabid fan of all things paranormal – especially vampires – since I first got my hands on Bram Stoker’s Dracula. To me, there’s just something fascinating about those extraordinary nightwalkers.

My son and I live in Boulder, Colorado, in the beautiful foothills of the Rocky Mountains. (Affectionately known as “The Republic of Boulder.”)

The Vampire Shrink was my first completed full-length fiction manuscript. And, like all my stories, it crosses genres. It’s an urban fantasy romance w/mystery elements, sex, dark humor, and a contemporary vibe. 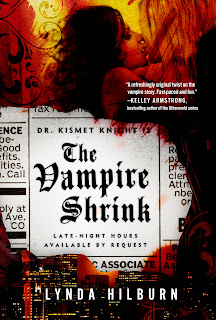 
A sizzlingly sexy urban fantasy sure to feed the hunger of ravenous, vampire-loving fans.

Kismet Knight, a brainy Denver-based psychologist with a stalled career and a nonexistent love life, is about to have her world rocked. Not only does her newest patient, Midnight, long to become a vampire, but the teenager insists that a coven of the undead hangs out at a local goth club. The always-rational Kismet dismisses Midnight's claims as the delusions of an attention-starved girl--until bodies start turning up drained of blood and the hottest self-proclaimed vampire ever to walk the face of the earth enters her office.

What's real? What's not? As inexplicable events and romantic opportunities pile up, along with the corpses, Kismet finds herself in a whirlwind of passion, mystery, and danger. But this tough and funny heroine--who doesn't do damsel in distress--is about to turn the vampire-meets-girl convention on its head.