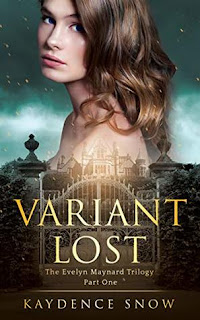 When Evelyn Maynard receives a scholarship to the exclusive Bradford Hills Institute, she’s determined to make a fresh start. The Institute is world renowned for educating and training Variants – the 18% of the population fortunate enough to have superhuman abilities. As a human, she’s lucky to be admitted.

She’s done with fake identities, running and lying but once again she finds herself surrounded by secrets.

Some she’s been keeping her whole life.

Some have been kept from her.

Some she finds herself dragged into…

Ethan, Josh, Tyler and Alec have some of the rarest Variant abilities Evelyn has ever seen. They fascinate, intrigue and attract her, but is it their abilities, their own secrets or something more that Evelyn can’t seem to stay away from? The secrets they keep could drag Evelyn so deep into their dangerous and exciting world that she’ll never be the same.

And the answers she finds could get them all killed.

I had pretty high expectations going in due to the shared last name and VARIANT LOST did not disappoint.  I found Eve to be a bit naive and juvenile at times, but she was also persistent and loyal. I had no trouble liking her even through her faults.

All of the guys in VARIANT LOST intrigued me. Alec was extremely frustrating, but the more you learn about him the more he grows on you. I really enjoyed all the different gifts that were represented as well as learning about how each gift works.

There was plenty of action in book 1 of the Evelyn Maynard series and I never found myself bored. The romance is a bit slow, but not too slow that it's frustrating. The world was interesting and kept me guessing. I had book two on my wishlist before I even finished the book and had it read within 24 hours of release. Now I have to wait for book three.