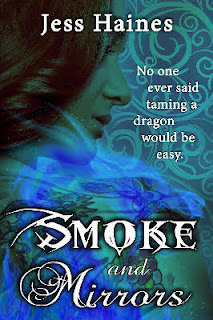 
A girl who uses her illusions to fool the world into thinking she's just like all the other magi.

A dragon who sees through her lies.

Together they just might survive a world that wants to control or destroy them both.﻿

Kimberly may wield ultimate cosmic power, but even a mage has to pay the rent. No one will hire her for her magic talents until she's got the credentials, so she’s stuck in a crappy rent controlled apartment with her mother, yearning for treats she can't afford at her part time job in a café, counting down the days until she graduates the secret Blackhollow Academy school for magi. Only then will she have the certificate she needs to land her dream job in a coven.

The problem? She needs a familiar to graduate.

As an illusionist, she doesn't have the ability to summon or create a familiar of her own. Her only option is to convince a supernatural creature to let her bind it instead. Since having a powerful Other at her beck and call would guarantee her a place in a coven after she graduates—and legendary treasure hoards are an added bonus—she thinks binding a dragon as her familiar will solve all her problems...

Because sometimes a girl needs a dragon, not a knight....

I was completely enthralled with the story in SMOKE AND MIRRORS. I found the main heroine Kimberly to be extremely hard working and down to earth. It was very easy to tap into Kimberly's emotions which made the story that much more enjoyable as the trials and tribulations she went through came to pass. Even though she has not lived an easy life and doesn't have much herself, she was very willing to help others in need. I just really liked her and can't wait to see how her life will continue to unfold in the next book. There is romance in SMOKE AND MIRRORS. It's slow and a bit turbulent, but it was also real and well played out. The development of said relationship is another thing I'm looking forward to in book two.

My only complaint about SMOKE AND MIRRORS is that sometimes it read like a YA novel and sometimes like an adult novel and to this day I'm not quite sure where it should land. As I said already, I'm looking forward to reading book two and I keep checking the authors pages to see when it might be planned.