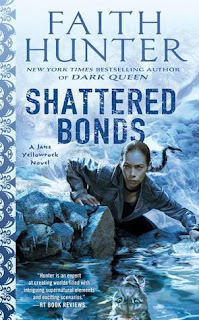 
Jane Yellowrock must dig deep and find strength within herself if she is to survive in the latest novel in this New York Times bestselling series.

Jane Yellowrock is a shapeshifting skinwalker, and vampire killer-for-hire, but her last battle with an ancient arcane enemy has brought her low. She seeks retreat in the Appalachian Mountains to grieve the loss of her friends, and to heal--or to die--from the disease brought on by her magic.

But malevolent elements in the paranormal community still seek to destroy Jane, and the younger Son of Darkness stalks her, even into the safety of the hills. With nowhere to run and her body failing, the rogue-vampire hunter and her inner Beast must discover a way to defeat this new threat, and find a form that gives her a chance to fight another day.


Author’s Note: This is a short story that fits nowhere. The timeline isn’t perfect but the fans won this story by pushing Beast’s FaceBook page and getting us to three thousand Likes. It was seen online for 30 hours. It will eventually be placed in the timeline, edited, altered, and expanded. Enjoy!
“The Circle III Hunting Ranch outside San Antonio, is family owned by the current generation of Ivers,” Sam said, “but it was started by Charles Ivers. He was a well-educated man, good lookin’, charmin’, traveling from Maine to see the wild west and make his fortune. He stopped in San Antonio where he met the exotic, beautiful, beloved, only child of Hector Casillas, a wealthy Mexican businessman.” Sam idled the Hummer in the middle of the road so they could stare through the iron fence down the long straight drive to the white-painted two-story home illuminated with landscaping lights. There were several outbuildings just beyond the house, and horses in the pastures to either side of the drive.
The smells of hay, feed, manure, and horse came to Ed’s nose, awakening a forgotten longing in him.
“Charles Ivers fell in love and promptly married Olivia Casillas, who bore him three sons,” Sam said, “giving the older Casillas a happy, joy-filled later life watching his grandsons grow. When Olivia’s father passed and the Ivers inherited her father’s fortune, they purchased this land, and in 1849, before Texas was even a state, the Circle III cattle-brand and ranch was born. The O stands for Olivia, and the ‘I’s’ in the center of the circle stand for the three Ivers’ sons. A love story to last the generations.”
“Mmmm,” Ed said. He thought about a charismatic and beguiling young man who had found a way to acquire a fortune with nothing but charm. Ed had known many such men over the centuries. He had even been such a man. He asked, “Would you inquire of your employer about the possibility of a moonlight ride?”
Eli tilted his head in surprise at Edmund who merely smiled. It had been decades since he rode, but why not? He had forty-eight hours here before he was neck-deep in duels and the arcane rules and politesse of his own kind. Why not enjoy this mess Jane Yellowrock had gotten them into? Money talked and he had paid an unreasonable fortune for five-star service.
“Make that two of us,” Eli said. Then he grinned. “Prissy boy here will need a prissy English saddle, Sam, and a prissy flashy horse. I’d like a good, sturdy, neck-reining cattle pony.”
“You ride?” Edmund asked.
“I ride. I spent six months on horseback in-country once upon a time, tracking down a gang of bad hombres.” Eli chuckled and the sound was cold and harsh. “Uncle Sam’s finest know all sorts of things, Prissy Boy.”
“Are you challenging me for some reason,” Ed asked mildly, “or just for fun?”
Eli grinned, a sudden wild light in his eyes. “We can call it fun. For starters.”
The gate opened with the touch of a button and the Hummer turned down the drive. Alex had rented one of the log cabin cottages to the back of the house, and Sam dropped them off to freshen up while he proceeded on to the main house to inform the boss that the guests would like to begin their stay with a moonlight ride. As the Hummer rolled away into the night, Beast stretched into impossible positions and breathed in the night air with that sucking sound she made. She chuffed, rose onto her hind legs and placed her front paws on Ed’s chest, getting dust all over his lapels.
He discovered that he didn’t really care. If he was dusty and dirty, who would dare to take offence? Besides, he could afford a dozen new suits if he so wished. He was the Emperor the of the European Mithrans.
The realization hit him hard.
He was the Emperor of the Mithrans.
Leo Pelissier had plotted, contrived, and schemed for this, to get Edmund into this position, as a last-ditch maneuver should the Master of the City of New Orleans die. And then he had. Tears gathered in Ed’s eyes and wild grief filled his chest. His friend was buried. There was a million-to-one chance he could ever come back. And if he did, Leo would not be the vampire he once was.
As if she felt his pain, Beast patted his cheek with one paw, the way she might a kitten. She chuffed into his face, dropped to all fours, and trotted into the darkness. Ed assumed she was getting the lay of the land. “Don’t kill anything tonight, cat. Our official hunt begins at dusk tomorrow.” In the distance he heard another chuff, but she was gone.
***


Beast loped into night. Smelled familiar deer and strange deer and … strange cows. And … bison. Beast crouched and belly crawled to small hillock. Night vision was green and silver and sharp and … bison were everywhere. Beast tightened. Pulled claws under self. Watched bison. Beast lay on warm stone and stared down into low land full of bison.
Many, many-more-than-five bison. Smell of bison filled nose.


Ed stepped into the cabin, his hand-made, bespoke, calf leather dress shoes tapping on the dark stained wood floors. The log house was two stories, with the main living area open to the high rafters and dormers to let in light by day. As advertised, there the cabin had fifteen hundred square feet of living space, all the outer walls logs, all the inner walls rustic-looking wood. There was a stone, wood-burning fireplace with a bison head centered over it, and a wood-burning stove in the corner. The space was filled with old furniture. Not antiques, nothing from a civilized time, but just old furniture, all with a wild west flair, not a single piece more than a hundred, hundred-fifty years old. He was older than that.
Old rifles hung on the walls, too high to remove without a ladder and wire cutters. There were America Tribal blankets on the upstairs railing, an old saddle draped out over the balcony, and of course, the ubiquitous antler chandelier. There were sepia tinted photographs of gunslingers and western cities. The dishes in the glass-fronted cabinet once used in a pharmacy were heavy stoneware; the glasses were cobalt blue from a department store, the mugs hand-turned. Inexpensive, but clean. The bedroom on the lower level had steel shutters on the widows with heavy draperies for a vampire’s daytime sleeping schedule, and a thumb-turning deadbolt on the inside of the bedroom for personal security.
He walked into the vampire room to find Alex already there, his tablets spread over the bed.
“Dibs,” the kid said.
Ed merely looked at him. Drawing upon the smallest hint of his power, silent, deadly. Cold as an artic wind. He let his eyes bleed scarlet and his pupils widen. He kept his fangs in place. They were weren’t needed. All that was required at the moment was the reminder that he was in charge. That he was the predator. Alex had been obnoxious and bossy and acting out, as Jane might have said. So, he stared, holding Alex’s gaze, leaking power. Reminding the youngster that there was a pecking order. Or a feeding order. And Ed had brought no blood-servants to feed upon.
Alex broke into a sweat and stepped back. He gathered up his tablets. “It was a joke, Dude,” he muttered, practically jogging from the room.
“Was it?” Edmund asked, his voice carrying, yet soft as a whispered snarl. He dumped his gear on the bed and unpacked. Staring at the denim jeans in his suitcase. The button shirt. It was plaid. He hadn’t worn plaid since England. He hated plaid.
When in Rome, eat pasta. When on a southwest hunting ranch…

Faith Hunter is the New York Times and USAToday bestselling author of the Jane Yellowrock series, the Soulwood series, and the Rogue Mage series, as well as the author of 16 thrillers under pen the names Gary Hunter and Gwen Hunter. She has 40+ books in print.

Faith collects orchids and animal skulls, loves thunder storms, and writes. She likes to cook soup, bake homemade bread, garden, and run Class III whitewater rivers. She edits the occasional anthology and drinks a lot of tea. Some days she’s a lady. Some days she ain't.
For more, see www.faithhunter.net
To keep up with her, like her fan page at Facebook: https://www.facebook.com/official.faith.hunter