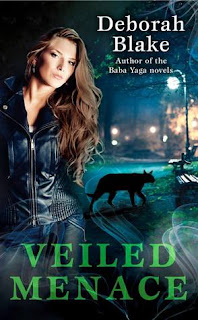 
From the author of Veiled Magic and the Baba Yaga novels, comes an exciting new paranormal romance...

Since Witches came out of the broom-closet in the early 21st century, they have worked alongside humans as police officers, healers, stock traders, and more. But they aren’t the only paranormal entities in our world...

Witch and police officer Donata Santori is no stranger to magical mayhem, but lately her life has been unexpectedly charmed. Her job as a Ghost Yanker now includes the occasional paranormal investigation, and she’s advancing her magical abilities with the help of an ancestor’s treasured spell book. And while both of her former love interests—reclusive half-Dragon art forger Peter Casaventi and disgraced Shapechanger Magnus Torvald—are nowhere to be found, she’s not averse to being wined and dined by wealthy businessman Anton Eastman.

But Eastman isn’t what he seems, and what he wants from Donata is far more than she’s willing to give. When a mysterious relic, the Pentacle Pentimento, resurfaces, along with Peter’s Dragon father and a shocking Santori family secret, Donata must fight to save herself, her friends, and just maybe the fate of the world from a magic as old as it is dangerous…


I didn't feel like VEILED MENACE was as strong as VEILED MAGIC, but there was still some good and I had no trouble reading until the end.

I was happy with the answers that were revealed in VEILED MENACE, but the storyline wasn't as action packed and exciting as book one. One of my favorite parts of VEILED MENACE had to do with what happened between Donata and her family. There was some breakthrough with how they treat her in regards to her job and I think it brought them a bit closer. One of her brother in laws even came to her for help with a problem. Now having written that, I wish I would have been more excited about the conflict of the book instead of that. VEILED MENACE would have been better with some more suspense and tension thrown in.

Let's talk about the romance. This series is urban fantasy, so romance isn't a must, but there was a lot of stuff going on in book one that I expected more out of the romance for VEILED MENACE. I was very disappointed in both Peter and Magnus in VEILED MENACE. One wasn't even present and the other was just a jerk at every turn it seemed. Then there was Anton. Not everything is what it seems with him and he rubbed me—and others—wrong from the get-go. The romance—or lack of— in VEILED MENACE was all around disappointing.

The world of the Veiled Magic series still interests me and I am keeping my fingers crossed that things will pick up in book three.