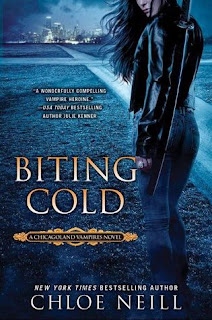 
Turned into a vampire against her will, twenty-eight-year-old Merit found her way into the dark circle of Chicago’s vampire underground, where she learned there was more to supernaturals than met the eye—and more supernaturals than the public ever imagined. And not all the secrets she learned were for sharing—among humans or inhumans.

Now Merit is on the hunt, charging across the stark American Midwest, tailing a rogue supernatural intent on stealing an ancient artifact that could unleash catastrophic evil on the world. But Merit is also the prey. An enemy of Chicagoland is hunting her, and he’ll stop at nothing to get the book for himself. No mercy allowed. No rules apply. No lives spared. The race is on.


Ethan and Merit are back together. YAY.  BITING COLD picks up immediately after the events of DRINK DEEP

I had a harder time getting into BITING COLD in the beginning but once the action started I was back glued to the pages waiting to see what would happen next. I know Mallory is Merit's best friend and all but I thought she got through everything a little easier then I would have preferred. Sure she is suffering but she caused SO much trouble and hurt, she was selfish and she could have destroyed the world. I was very happy with how Merit treated the whole situation. I was shocked by the multiple  twists regarding Seth Tate, who would have thought?  Ethan drives me nuts sometimes. He still attempts to "protect" Merit in BITING COLD in his usual way and I really wish I could have smacked him upside the head at one point. He did however fix his thinking. I missed not having Jonah a big part of the story but hopefully he will be back in a greater role now that Ethan is back for a whole book.

The Winner chosen by Rafflecopter is.....
a Rafflecopter giveaway
Congrats!! I have emailed winner who has 48 hours to respond with mailing address or I will pick another.
Posted by StacyUFI at 2:00 AM No comments: