Interview: Even Villains Have Interns by Liana Brooks

UFI welcomes Liana Brooks. Thanks for Joining us!!

I have such a public life with Twitter and all, what do you not know? Let's see... I was a diehard fantasy fan as a kid. Tolkien was the only author I would read until I was about seven or so. Every time we rented movies I'd get the old animated Lord Of The Rings with the creepy almost live action ring wraiths. My dad bought me a copy of DRAGONSONG by Anne McCaffery when I was in second grade and I wouldn't read it for months because it didn't have Gimli or Legolas in it. High fantasy was all I read until a friend introduced me to sci-fi and The Stainless Steel Rat series in high school.

Down time? What is down time? If I have a free moment of the day I sleep. The majority of my waking hours are spent parenting with writing and household chores squeezed into any spare second. Even if you took my computer and family away for a day I have a list of things I want to get done. I don't have free time, I have breaths between projects.

Exploring. I love the moment when a new world or a new book clicks into place. It's like climbing through a muddy hole in the darkness, you can feel the rocks and smell the dust, but you're lost and trapped... then suddenly the darkness falls away and there's this whole universe expanding at your feet filled with light and wonder.

I need my computer and that's about it. I keep pen and paper with me for notes, but I hate transcribing written text to the computer so I avoid it whenever possible.

I love everything by Ilona Andrews. Patricia Briggs' Mercy Thompson series is addictive and I recommend it to everyone. I like the Dresden novels by Jim Butcher but prefer the Codex Alera. Still, if you want to read about ghosts, you can't go wrong with DEAD BEAT.

How would you pitch Heroes and Villains to someone who has not heard of it before?

Despicable Me meets the Incredibles? It's a series for anyone who has ever felt sympathy for the villain. These are books for the people who think that sometimes, maybe, the ends justify the means. It's wish fulfillment for anyone who ever thought Gambit and Rogue should have had a Happily Ever After.

We all grew up with superheroes and we're used to seeing them fall apart. We're told the hero has to stand alone. That's why I write villains, they break the rules. A villain can save the world and fall be in love at the same time.

Can you tell us a little bit about the world that Heroes and Villains is set in?

The Heroes and Villains series takes place in our world, a few years in the future, at a time when humans have started to evolve superpowers. Not everyone has them, and not everyone believes they exist, but the people who do have them are forced to choose between using their talents for selfish gain, or to help others. A couple of my characters try to do both, but it never works. You have to pick a side.

Do you have a favorite scene in EVEN VILLAINS HAVE INTERNS?

I'm torn on this. I love the basketball scene because it's sexy in an aggressive, athletic way. I used to play pickup games (usually street hockey not basketball) as a teen and there's some of that competitive-drive-turned-to-lust feeling there. There's a very fine line between love and hate and competition can blur the line.

My other favorite scene is down in the Chicago pedway. I loved researching the old tunnels and I'd love to explore them some day on my own. I don't know if the readers will it as much, but I enjoyed researching the scene.

Delilah was the easiest to write in this book. She's a very no-nonsense person who isn't afraid of her strength and that's always fun to write. The Shadow was harder to write because he is so secretive and there were times I just wanted to shake him! Give me details! He'd just give me this enigmatic smile and leave me frustrated.

Both Even Villains Go To the Movies and Even Villains Have Interns are coming to print this year, which is big news for everyone who isn't an ebook fan. Heroes and Villains Book 4 is almost done and hopefully will release in Fall 2015. Book 4 is Maria's book. She's a full-time villain, crazy as a bag of cats, and so much fun to write. The trick is making someone so traditionally evil also a likeable character. And then, if everything goes well, Even Villains Fall In Love will be coming to print in the next year with two brand new short stories; The Sea Monkey Incident (young Evan), and Every Hero Needs A Villain (Tabitha's story).
__________________________________

Liana Brooks would like to SCUBA dive Europa (that moon around Jupiter), but with the NASA shuttle program shut down she’s resorted to writing science fiction instead. She likes southern beaches, warm weather, sharks, and striped socks.

Her superhero romance series started with Even Villains Fall in Love and continues with Even Villains Go to the Movies and Even Villains Have Interns. For those who prefer their romance without a side order of spandex she’s written Prime Sensations (part of the Tales From the SFR Brigades anthology) and Fey Lights. 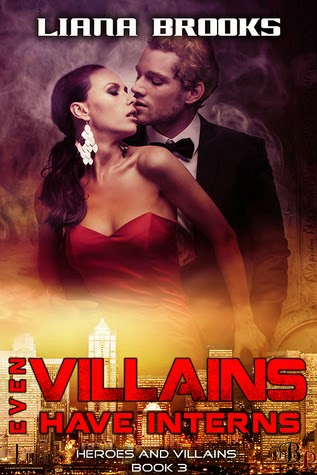 Even Villains Have Interns
Heroes and Villains #3
Buy Link


Bootleggers, drug dealers, crooked cops, and dirty politicians... Chicago has always had a reputation for indulging in the finer vices of life. That’s why Doctor Charm’s favorite daughter found America’s Second City so appealing; criminals are never boring. As second in command for the powerful Subrosa Security group, Delilah Samson finds opportunities to use her superpowers at every turn. Whether it’s stealing a priceless French painting from a mobster or stopping a drug deal, she’s game.

In fact, the only thing she doesn’t care for is Chicago’s favorite native son, Deputy Mayor Alan Adale, the man who made Lucifer jealous. Sinfully handsome, or possibly just sinful, Adale has been pursuing Delilah since she first arrived, and she’s been dodging.

When she finds ties between the new kingpin in town and a drug The Company wants to buy so they can create more superheroes, Delilah takes the gloves off. Teaming up with the spooky Spirit of Chicago, she aims to take down the dealers, the mobsters, the kingpin, and The Company. All without falling in love with the one man capable of capturing her heart.

Snow crunched under Delilah's boot as she stepped out of the cab on East Jackson Drive. "Park down by the university," she told Freddie as a voice on the police radio confirmed an ambulance was en route to collect the final remains of Mayor Arámbula.

Buckingham fountain was beautiful, even late on a winter night. Past the skeletal trees, golden lights illuminated the sparkling water—the strobe of blue and red from the waiting squad cars rather ruined the romantic affect.

The cab pulled away. Delilah walked through the fresh-fallen snow, drifting across the icy sidewalk with the calm demeanor of someone exactly where they belonged.

At the edge of the square, one of the officers noticed her. "Ma'am, can I help you?" he said stiffly, shining a flashlight at her face.

He squinted, trying to make out her face under the black top hat she wore. "Did you hear anything? See anything?"

"I didn't." She watched as the ambulance pulled up and paramedics hurried to the body. They lifted the dead mayor onto a stretcher and a scrap of paper fell out of his pocket. The wind caught it, lifting the paper up out of the snow and blowing it toward her.

"Hey!" one of the officers shouted. "Somebody grab that! Gelphi! Catch that!"

Delilah snatched the paper out of the air with a gloved hand. "Here," she held it out to the policeman she assumed was Officer Gelphi. Three barely legible words scrawled across the paper: Kalydon - 77 Wacker.

"Thank you." Gelphi took the paper back with obvious hesitation. "Ma'am, I'm going to ask you to move along. This is a crime scene."

"Of course." News vans were already parking on Lakeshore Drive and she didn't need to be on camera. "Have a good evening." Pivoting on her heel, Delilah strolled back along the snowy streets until her nose was numb. Seventy-seven Wacker was an office building that had been on the market for several months. It wasn't somewhere the mayor would have gone for a party, but a black market business deal? That sounded plausible.

A warm breeze alerted her to company. "Fancy meeting you here," The Spirit of Chicago said.
Delilah stopped, watching him from the corner of her eye. "How did you hear about this?"

"I have friends at the police department. You?"

She shrugged. "I know all the good gossips." She turned to face him, or as much as there was of him. The festively lit streets twinkled through his gossamer body. "Where were you tonight, superhero?"
"Where were you, do-gooder super villain?"

With a grimace, she shrugged again. "Busy. I have an airtight alibi. Over a hundred people saw me flirting with a handsome man tonight. We didn't get as far as drinks. Disappointing, overall. Your turn."

"I was trying to attract the attention of devastatingly beautiful woman."

Delilah almost laughed. "Oh? How'd that work out for you?"

"She looked right through me."