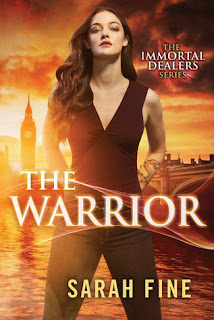 The Warrior
The Immortal Dealers #3
Purchase Your Copy Today!
View the Series on Amazon

For those who deal in the fate of the world, salvation and destruction is not a game of chance.
Ernestine “Ernie” Terwilliger never intended to live among the Immortal Dealers, much less to be party to an ongoing battle where the fate of humanity is in the draw of a card. And the stakes have gotten only higher now that a shady new Forger has been crowned.
Virginia may be in charge of creating the chaos that makes the universe tick, but her assignments have been noble—each one in the aid of strangers. But when Ernie discovers Virginia’s true purpose, she realizes it’s going to take an entirely new kind of play to stop her.
The game changer lies within a mysterious artifact dredged from the ocean. To unlock its powers, Ernie and her partner, Gabe, must traverse dangerous new realms and uncover the history of Forgers past. Joined in a tenuous alliance with a former enemy and stalked by old friends turned lethal foes, Ernie had better play her cards right—because this time, the whole universe could be destroyed in the shuffle.

Sarah Fine is the author of several books for teens, including Of Metal and Wishes(McElderry/Simon & Schuster) and its sequel, Of Dreams and Rust, the bestselling Guards of the Shadowlands YA urban fantasy series (Skyscape/Amazon Children’s Publishing), and The Impostor Queen (McElderry, January 2016).

To celebrate the release of THE WARRIOR by Sarah Fine, we're giving away three paperback sets of The Serpent and The Guardian, the first two books in the Immortal Dealers series!

GIVEAWAY TERMS & CONDITIONS:  Open to US shipping addresses only. Three winners will each receive a paperback set of The Serpent and The Guardian, the first two books in the Immortal Dealers series by Sarah Fine. This giveaway is administered by Pure Textuality PR on behalf of Sarah Fine.  Giveaway ends 4/6/2019 @ 11:59pm EST. Limit one entry per reader. Duplicates will be deleted.