I am excited to reveal the cover for THE MAGICIAN, the first novel in the Dark Arcana series by E.J. Stevens.  Cover art is by digital artist Ruxandra Tudorica of Methyss Design. 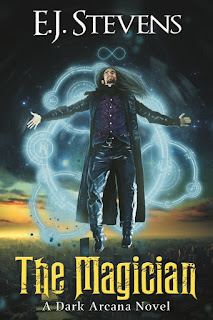 When members of tarot's Major Arcana begin manifesting in the mortal world, magic is in the air and change is in the cards.

To celebrate The Magician's cover reveal, we are giving away a signed cover art postcard and a $10 Amazon Gift Card!

To enter, please use the Rafflecopter form below.  This giveaway is INTERNATIONAL.  Giveaway ends February 2, 2016 midnight EST.

What do you think of the cover?

Connect with E.J. Stevens by following her on Twitter, Facebook, Newsletter, Blog, Goodreads, and Amazon.
Posted by StacyUFI at 3:00 AM 3 comments:

Feverborn (Fever #8) by Karen Marie Moning
The Isle (The Ward #2) by Jordana Frankel
Wickedly Ever After (Baba Yaga #2.5) by Deborah Blake