Review: Gone With the Wolf by Kristin Miller 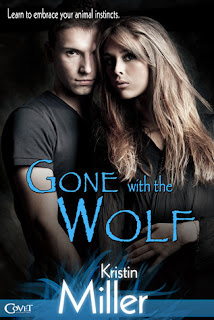 
Emelia is a struggling bartender that is trying to save her bar from the corporation that says they own it. She gets a temp job there in hopes of running into the boss so she can clear up the mistake. Little does she know that it will turn her world upside down. Drake is the CEO of a successful company. He also happens to be a wolf looking for his mate so that he can have exclusive rights to rule over the pack his father left him his twin brother. His mate comes where he least expects it!

I liked that we didn't have to wait to long for the 'couple' to meet. Emelia and Drake were cute together. They had their issues as a couple and individually but their connection was instant and it only grew as time went on. The sexy scenes were super sexy! The plot wasn't mysterious. You could guess often what would happen next, but I enjoyed the way it progressed. The pace was nice and fast and I never found myself bored. The story had a way of drawing me in and the characters were great entertainment to the end.

I didn't think GONE WITH THE WOLF would be part of a series but I'm pleasantly surprised to see that it is. Now my only question is will we get more of Emelia and Drake or will we meet a new couple with every book. Any Paranormal romance or werewolf fan will enjoy this!


The Brazen Amazon by Sandy James
Day After (The 19th Year, #2) by Emi Gayle