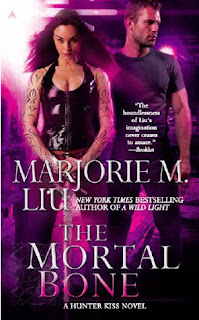 
When the bond Maxine Kiss shares with the demons tattooed on her skin is deliberately severed, the demon hunter is left vulnerable and unprotected. For the first time in ten thousand years, the demons have a taste of freedom. And as the little demons grow more violent and unpredictable, Maxine starts to fear they will lose their minds without her. Reuniting won't be easy, since a greater temptation waits for these hellions: a chance to return to their lives as Reaper Kings, and unleash hell on Earth.


THE MORTAL BONE was a very quick, easy read. All of my favorite characters make an appearance at some point through out the book and as usual the crap hits the fan early on. The Boys are literally wripped off Maxine's skin and the book is a constant fight to keep them on the side of good.

Maxine and Grant are such a cute couple. They are very protective and loving towards each other and I love watching their relationship evolve (the reaction they got from people that they were married was great to read about too). There is some great action and suspense written in. We learn some more about Maxine's father and I'm pretty excited about what that means for Maxine in the future. There was a lot of emotional stuff happening throughout the book and a lot of soul searching on Maxine and the boys parts that was interesting to see. I was a little disappointed in the way in which Maxine had to change in THE MORTAL BONE and how much she had to deal with. She was pretty much beat up on from the beginning to the end and it got to be a little much. I liked how set in being good she was in the past and she had to throw some of her morals out the window, it wasn't entirely her fault but it still sucked to read.  I liked seeing Max without the boys on her skin, I wish there had been a little different outcome of the fiasco but I can see why that wouldn't be possible and hope to see some great things happening in the next book. Things are definitely interesting at the end so even with the things I didn't enjoy I'm still liking the series as a whole and plan to continue reading. This is a series you need to start at book 1 for.