UFI welcomes Author Elliott James. Thanks for Joining us!!

Very little.  It’s part of my agreement with the Witness Protection program. Wait!  Delete!  Delete!  I’m sorry, I’m feeling silly this morning.  Ummm…I’m obsessed with Scrabble.  The worst part about writing is that it’s hard for me to do it outside. My favorite summer 2015 show has been Mr. Robot.

Reading.  Hiking.  Running.  Begging friends and family to play Scrabble with me. Thwarting the plans of a secret biological father who is hellbent on world domination.

Every now and then I hit patches where it’s sort of the literary equivalent of a runner’s high, and rightly or wrongly, I know I’m not going to go back and edit what I’m writing too much.  And I don’t know why that happens.  Society’s perception of writing seems different from our perception of music.  When we listen to music, it’s very instinctive.  We respond to something that makes us feel like someone else is expressing an emotion we want to purge like a toxin, or sharing an emotion we want more of in our life. Music makes us feel like someone else out there has felt what we feel and that we’re not alone.  Writing is like that too, but nobody knows why certain sounds in music create an emotional effect, and most people think they know why words do whatever it is that words do because they communicate specific information as well as emotion. But you can write the exact same information down in different ways, and the sentences can have widely different meanings or effects.  Or two different people can read the exact same sentence and have widely different reactions.  I guess what I’m saying is, I love it when I connect with something that I couldn’t plan or predict while I‘m writing.  And then I try to plan and predict how to do it again anyway.

My alarm clock goes off at 4.50 a.m., so coffee plays an important part of my mornings.  I get out of bed and put on some pajama pants (just one of many things in life that I get backwards). I have different pajamas for different moods.  The shaggy ones with action sounds and comic book word balloons all over them are my favorite for action scenes for example. Right now I’m wearing the faded comfy blue and white checkered ones.  I also have a teddy bear named Mr. Whillikers who sits on my lap white I type.  He’s my main editor, which might explain some things.  Okay, that last part was a lie (Mr. Whillikers doesn’t talk much, and when he does, he’s usually telling me to do bad things).  Okay, that parenthetical observation was a lie too, and pretty dark humor at that, so I’m going to get serious now.  When I’m pajama’d and coffee’d up, I might put on Pandora for music, which I like a lot because there aren’t many commercials and I can set Pandora to a specific mood.  Right now I’m listening to the Amy Winehouse channel for example.  I know her life was chaotic, but I find most of her music oddly life affirming.   Then I go to work.  Not that writing isn’t work.  I’m talking about work, work. The kind that renders me incapable of writing afterwards, which is why I get up so early.  On weekends I like to go someplace where there are people in the mornings and write.  Coffee shops if I don’t mind driving and plan to stay awhile, because all of the best ones are at least forty minutes away.  Sometimes I’ll go with friends who are teachers and want to get some grading or grad work in.  If I have other plans for the day, I’ll just go to a local eatery.  Around this part of Southwest Virginia, that means BBQ shops or country cookin’ places, and I’m the only person with a laptop in them.  People look at me like I’m the downtown eccentric. Of course, that might also be the pajamas.

I’ve actually answered this question a couple times before, and I always try to mention different authors or works, and that seems like a trend worth maintaining.  Dragon’s Teeth by James A. Hetley begins a fun series. I love Territory by Emma Bull although I suppose technically that’s Western Fantasy, so maybe I should say The War for the Oak instead.  Mike Shevdon’s The Road to Bedlam is very cool.

How would you pitch the Pax Arcana series to someone who has not heard of it before?

Basically, I try to turn fairy tales inside out and see what makes them tick and how they would actually play out in real life.  The main character, John Charming, is the descendant of all those guys who were named Charming in the fairy tales, but they weren’t princes at all, they were members of a family of monster hunters.  He’s not perfect or pretty – he’s actually very sarcastic and ruthlessly business-like about killing monsters and kind of a jackass when the series starts.  Which might backfire if you go into it thinking it’s a paranormal romance or a Cinderella story.  The series is more like Supernatural than Once Upon A Time. There is a romance element because he is named Charming, but the damsel in distress is a type of mythological warrior maiden called a Valkyrie, and she doesn’t really need saving.

Can you tell us a little bit about the world that the Pax Arcana series is set in?

Honestly, my primary reason for writing it is that I’m a mythology nut.  That’s why I love Urban Fantasy, and it’s also why I get a little frustrated reading about vampires and werewolves all of the time, especially when it seems like the modern stories are based on other modern stories. Which might sound odd, because my first two books involve vampires and werewolves, but it’s because I like to try to turn some tropes upside down and examine the traditions beneath them.  Honestly, since vampires and werewolves are so predominant, I sort of had it in my head that if I just started talking about domoviks, nobody would care.  But my first two books also include Valkyrie, naga, bakaak, baba yaga, kresniks, domovik, yukshee, wendigo, Knights Templar, sprites, the Fae, skin walkers, and dhampir.  Book three, Fearless, brings in Bhut, onmyouji, snow women, oni, harionaga, hopping corpses, kitsune, spriggans, sirens, gorgons, leopard people, half elves, dark elves, bear walkers, and a few other beings I don’t want to mention because they’re surprises. So I guess what I’m saying about the world I’m creating is, I’m gradually opening a set of very wide double doors.  My fondest wish is that some other people will read these books and see a lot of possibilities with these beings that I don’t cover and do more with them someday, even if these hypothetical jerks do a better job than I do.  If reading is an ongoing conversation, I’d really like to help bring some of these beings into it, or bring some of them back to their roots.

Do you have a favorite scene in Fearless?

It would probably be when John Charming goes into the Dream Time of Aborigine myth.

In Fearless, my favorite was a witch named Sarah White.  She first appears in a story called Don’t Go Chasing Waterfalls, but you don’t have to read that story to read the novel. The thing I like about Sarah is that she’s an Alice Hoffman or Joanne Harris or Sarah Allen kind of a witch in John Charming’s world.  You know, very spiritual and enlightened and compassionate and nurturing.  She’s basically just trying to build a peaceful life in a controlled environment, and then she gets pulled into these situations that are not any of those things, and I like the tension and contrast. 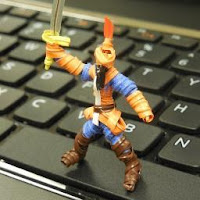 An army brat and gypsy scholar, ELLIOTT JAMES is currently living in the blueridge mountains of southwest Virginia. An avid reader since the age of three (or that's what his family swears anyhow), he has an abiding interest in mythology, martial arts, live music, hiking, and used bookstores. Irrationally convinced that cellphone technology was inserted into human culture by aliens who want to turn us into easily tracked herd beasts, Elliott has one anyhow but keeps it in a locked tinfoil covered box which he will sometimes sit and stare at mistrustfully for hours. Okay, that was a lie. Elliott lies a lot; in fact, he decided to become a writer so that he could get paid for it. 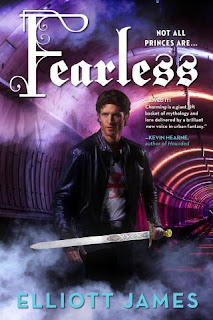 When your last name is Charming, rescuing virgins comes with the territory -- even when the virgin in question is a nineteen-year-old college boy.

Someone, somewhere, has declared war on Kevin Kichida, and that someone has a long list of magical predators on their rolodex. The good news is that Kevin lives in a town where Ted Cahill is the new sheriff and old ally of John Charming.

The attacks on Kevin seem to be a pattern, and the more John and his new team follow that thread, the deeper they find themselves in a maze of supernatural threats, family secrets, and age-old betrayals. The more John learns, the more convinced he becomes that Kevin Kichida isn't just a victim, he's a sacrifice waiting to happen. And that thread John's following? It's really a fuse...


FEARLESS is the third novel in an urban fantasy series which gives a new twist to the Prince Charming tale. The first two novels are Charming & Daring.