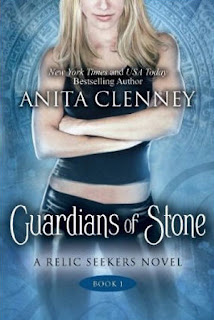 Kendall Morgan is a human bloodhound. Spending her childhood hunting relics with her ambitious archeologist father, she knew the two of them shared a sixth sense for the history and location of objects—sometimes even people. What she didn’t know was that their paranormal gift could ultimately be their undoing.

After the tragic plane crash that killed her father as well as her childhood best friend, Kendall dedicated her life to finding and protecting relics. When mysterious, sexy billionaire Nathan Larraby hires her for his latest expedition—the search for four powerful relics —she’s thrown into a world of high-octane danger. He sends brooding mercenary Jake Stone to watch Kendall’s back, but he may have created danger of a different kind.

As the team chases down clues, a man called the Reaper makes a play for the artifacts and will stop at nothing to put them to his own sinister use. What’s worse is that Nathan hasn’t told the whole story, and the dark secrets he’s keeping could cost them the mission…and their lives.


GUARDIANS OF STONE is another one of those books I had never heard about until it showed up in my mailbox.

I liked Kendall, She was easy to connect with and read about. Her ability was neat to witness and it was fun watching her push down most of Jake's sexual attempts. Kendall has a habit of putting herself in more danger then needed but besides that I enjoyed following her character. Jake starts off as a sexist bad boy that ends up being so much more than that. He was a great protector and as a romantic interest brought some nice sexual tension to the story. I still don't fully understand Nathan but I assume that this is what the author wanted. There is a bit of a love triangle between the three but I couldn't tell if Nathan just wants to protect Kendall or if there is more there. I liked all the investigating and searching for the relic. It was well paced out with a nice amount of action and danger in every chapter. Jake and Kendall worked nicely together but pretty much stumbled along until they hit pay dirt most of the time. I agree with some other reviewers that have noted that you often know what will happen before the characters and I agree it can be a bit tiresome at times.

I'm dying to know how the whole childhood best friend angle will play out, I have my suspicions but no real proof one way or another and since it would be a bit of a spoiler I will keep my mouth shut. Hopefully book 2 isnt far behind. GUARDIANS OF STONE was a fun fast paced read with some interesting characters and an entertaining world that I would like to learn more about.