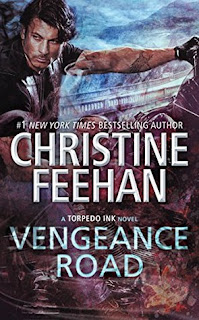 Breezy Simmons was born into a ruthless motorcycle club—and now that she’s out, she’s never going to be that girl again. But when her past catches up with her, Breezy must go to Sea Haven to seek out the man who almost destroyed her. The man who chose his club over her and left her feeling used and alone.

As vice president of Torpedo Ink, Steele is ride or die for the brothers he lived through hell with. He never thought he’d find something as pure as his feelings for Breezy, or that keeping her safe would mean driving her away with cruel words that turned her love for him to ash.

Now, Steele won’t let her walk away twice. He’ll do whatever it takes to make Breezy his woman again—especially when he learns the real reason she came to him for help, and that the stakes are higher than he ever could have imagined…


Suspense, action and danger are all things you will find in VENGEANCE ROAD.

I don't have a whole lot to say about the couple in VENGEANCE ROAD. I liked them as a couple and I liked them individually. The sex scenes were intense and I felt their connection in their interactions. The addition of a child was nice as well.

I mentioned in my review for JUDGEMENT ROAD that there wasn't a lot of paranormal happening. It was the same for VENGEANCE ROAD. There are a few little things, but I would have loved to see more paranormal aspects incorporated into the story.

There were actually a few points where I felt like I might have missed something so I went to check out some of Feehan's backlist books and realized this is a spin-off. I was going to read the previous series, but then realized THAT was also a spin-off. lol. I might go back to the beginning in the future, but for now, I'm enjoying meeting the Torpedo Ink members and will continue to read future Torpedo Ink installments.