Review: The Hunt by Chloe Neill 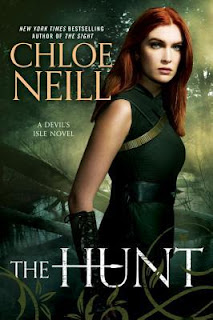 
From the New York Times bestselling author of the Chicagoland Vampires Novels--the hunter becomes the hunted in a New Orleans devastated by a Paranormal war....
When bounty hunter Liam Quinn discovered that Claire Connolly was a Sensitive and infected with magic, he should have turned her in to be locked up in the prison district known as Devil's Isle. Instead, he helped her learn to control her power and introduced her to an underground group of Paranormals and humans who know the truth about the war and those who fought it.
Now the weight of Liam's own secrets has forced him into hiding. When a government agent is killed and Claire discovers that Liam is the prime suspect, she races to find him before the government can. But she'll discover proving his innocence is no simple matter. Their enemies are drawing closer, and time is running out...


THE SIGHT left me pretty heartbroken for Claire and I was looking forward to seeing what would happen next for her.

THE HUNT started off a bit slow and 5 weeks after the end of book two. There was a great mystery to THE HUNT that kept me reading, but it didn't live up to the last two books in the series for me.

After all the action of THE SIGHT, THE HUNT was a little disappointing in that category. It does feature some good action scenes, but not nearly as much as previous books and the story tended to drag a little without it.

Thankfully the Devil's Isle series is urban fantasy because the relationship between Claire and Liam is frustrating. There is progress, but it always seems like two steps forward, one step back with them. Hopefully the progress made in THE HUNT sticks for a while.

The characters are really what kept THE HUNT from being a total downer. They are all  interesting, bring something unique to the group and they work really well together.  Hopefully I can get back into the series with book four.