Promo + Giveaway: Haunted by the King of Death by Felicity Heaton

Haunted by the King of Death, the eleventh book in New York Times best-seller Felicity Heaton’s hot paranormal romance series, Eternal Mates, is now available in ebook and paperback. To celebrate the release of Grave and Isla’s romance, she’s holding a FANTASTIC GIVEAWAY and sharing sneak peeks of the book.

Enter the Haunted by the King of Death international giveaway (ends August 14th) and be in with a shot of winning a $75, $50 or $25 gift certificate by using the Rafflecopter form at the end of this post or at her website, where you can also download a 5 chapter sample of the novel: http://www.felicityheaton.co.uk/haunted-by-the-king-of-death-paranormal-romance-novel.php 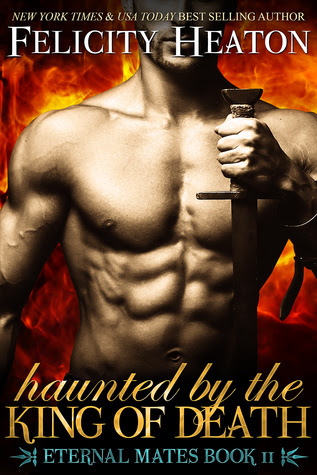 A ruthless vampire warrior, Grave Van der Garde rules the mercenary Preux Chevaliers with an iron fist, determined to retain his hard-won position as one of the most powerful men in Hell and his reputation as the heartless King of Death. But beneath the cold façade beats the heart of a vampire torn between love and hate, ripped in two directions by a single ethereally beautiful female—his fated phantom mate.

Driven by her phantom instincts, Isla used a spell to make her solid in order to deceive the vampire who killed her sister’s demon mate and have revenge on him, condemning him with a single kiss to become a phantom too. But her plan took an unexpected turn when she fell in love with him, and with her new life, and the night she betrayed him shattered both of their hearts. Now, he lives to make her suffer through their connection, one that is fading with them as they begin to slip into the phantom world, and she must face the monster she created if she is to save herself and the vampire she still loves.

With a demon from Grave’s past determined to destroy him and everything he holds dear, and the clock ticking down to their inevitable doom, can he and Isla overcome their past and their pride to work together to claim the future they both desire deep in their hearts? Or will death finally catch up with the vampire king and his phantom mate?

Haunted by the King of Death is available from Amazon Kindle, Kobo Books, Barnes and Noble Nook, Apple iBooks stores and other retailers. Also available in paperback. Find the links to your preferred retailer at: http://www.felicityheaton.co.uk/haunted-by-the-king-of-death-paranormal-romance-novel.php

Find all the links, a fantastic 5 chapter downloadable sample of the book, and also enter the giveaway and be in with a shot of winning a $75, $50 or $25 gift certificate at her website: http://www.felicityheaton.co.uk/haunted-by-the-king-of-death-paranormal-romance-novel.php