UFI welcomes Author LM Pruitt. Thanks for Joining us!!
HODGE-PODGE

Playlists are a huge thing in the book world. Readers always want to know what writers were listening to when they wrote that scene, you know the one, the one which ripped the reader’s heart out or sent shivers down their spine or made the reader’s heart beat a little faster. Writers, for the most part, are more than happy to share the details of what inspired them or helped move the story along. Karen Marie Moning, for example, is famous for not only sharing her playlist but also incorporating lyrics in to her work.

Unfortunately, I am not nearly as organized.

Now, that isn’t to say I don’t listen to music when I’m working. However, since I tend to write in coffee shops and restaurants, whatever I’m listening is Pandora or Muzak with the occasional political discussion thrown in for good measure. The music in the coffee shop tends to change with whoever is behind the counter—Mondays and Wednesdays, it’s eighties music with a foray once in a while in to classic country. On Tuesdays and Thursdays, it’s music from the fifties and sixties, heavy on the Rat Pack and blues.

This is music which, for the most part, I wouldn’t listen to while relaxing at home. It is, however, music which has provided some of my biggest plot breakthroughs. The huge cliffhanger scene at the end of BARRY which set up the premise for DAMNED happened because I Can’t Help Falling in Love with You played on Pandora and got stuck in my head for a week. The first intimate scene in DAMNED was written while Marvin Gaye’s Let’s Get It On was playing in the background—which gave me more than a few giggles, to be honest. As I’m writing this, getting ready to dive back in to the world of DAMNED, Tainted Love is playing on Pandora—again, shockingly apropos.

L.M. Pruitt has been reading and writing for as long as she can remember. A native of Florida with a love of New Orleans, she has the uncanny ability to find humor in most things and would probably kill a plastic plant. She knows this because she's killed bamboo. Twice.  She is the author of the Winged series, the Plaisir Coupable series, Jude Magdalyn series, the Moon Rising series, and Taken: A Frankie Post Novel. 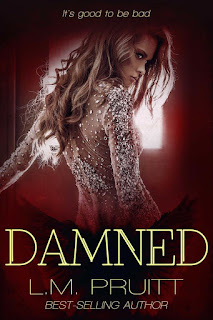 From the writer of the international bestselling WINGED series comes a look at the other side... where it's good to be bad....

I was thirty years old when I chose to die--or rather to give up my soul.

For all those things, being damned is a small price to pay.

“I’m Lacey Jackson.” She stuck out one hand, something in her eyes daring me to not take it. “And you are…?”
“Julie Watson.” I took her hand, making my reluctance more than obvious. The second my skin made contact with hers, a spark of energy shot through me so violently I couldn’t help but gasp. Swallowing, I said, “What brings you to Savannah?”
“Oh, I’m here for work.” Without releasing my hand, she slipped out of her seat and slid in to the one across from me. Leaning in, she lowered her voice and said, “I was fully prepared for it to be another dull, routine trip but now… well, now I think I’m glad I got assigned this route.”
“Oh.” The low fluttering in my stomach wasn’t unfamiliar—I was far from a virgin and I’d not only done Mardi Gras and Spring Break in Miami but I’d also spent a month in Europe after my college graduation. But this… this was something different. And not because it was caused by a woman.
This was… raw. Visceral. Almost feral. Like she’d tapped in to some hunger I wasn’t even aware I’d had and now that I did the idea it would go unfulfilled was almost too much to bear.
“You should come work with me.” She lifted our joined hands, brushing her lips over my knuckles. “I have a feeling you would be… amazing.”
“What?” It was as if all my attention was focused on the small bit of skin where she’d kissed me, tendrils of lust spooling out through the rest of my body in lazy ribbons. “What do you… what do you do?”
“I collect souls.” Her eyes darkened, her breath catching in her throat and I realized for the first time I wasn’t the only one affected by our contact. “Or rather the energy from them. The actual soul is taken up by someone else—it doesn’t matter, the details can be explained later.”
“You collect….” I trailed off, part of me sure she was joking and an even larger part of me sure she wasn’t. “Really. Why?”
“Because I can.” She flicked her tongue over her lips and I sucked in a shallow breath. “Because it’s fun.”
“But that would make you….”
“A demon, yes.” This time when she smiled, a dimple appeared in her left cheek and I was caught with the sudden urge to kiss it. “More specifically a succubus.” My confusion must have shown because she laughed. “I fuck people for their energy—sometimes to death, sometimes not. It all depends.”
“And you want to do that to me?”
“Oh, no.” She shook her head, her hair sliding across her shoulders, the tips curling over the swell of her breasts. “I told you. I want you to work with me and my sisters and Lilith.” She leaned closer and I breathed deep, the scent of her perfume almost painfully exotic. “I want you to join the ranks of the Morning Star and spend eternity tempting the weak and the wicked.”
What she was suggesting was lunacy. Madness. Even if I believed her, the idea of giving up my life to be some sort of demonic minion was ridiculous. Although….
What would I be giving up? A lifetime spent catering to David’s whims, denying myself the things I truly enjoyed because it would be bad for his reputation or his political chances or his weight? A lifetime attempting to please my parents and knowing it would never happen because nothing would ever overshadow Joanne’s sacrifice? A lifetime being nothing but the substitute?
What, exactly, would I be giving up?
“Jules.” The nickname I hated hearing from David sounded and felt like a caress coming from Lacey. Lifting our hands again, she ran her tongue over one of my fingertips before nipping lightly. Her voice was heavy with promise when she spoke again. “Come play with me.”
“Yes.” I breathed out the single word before leaning over the table and crushing my mouth to hers.
Who needed a soul anyway?