Promo + Giveaway: August Prather is Not Dead Yet by Danielle Roux (@DKRoux, @XpressoTours ) 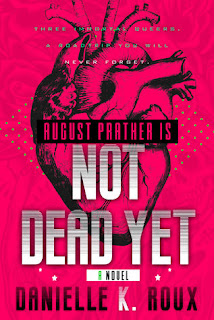 August Prather is Not Dead Yet

Katherine Garnet is a writer who has never cared much about much, making it awfully difficult to create new content. Despite the fact she has the “edge” of being trans (according to her cis male editor) she is not looking to capitalize on her own personal story. Garnet tries to sneak a peek at her rival, August Prather’s, latest fantasy manuscript about a quest for the elixir of life. While reading, Garnet gets accidentally dragged into a bizarre cross-country road trip that may or may not have a purpose and begins to see parallels in the story of the manuscript and the reality of their journey. Along the way, they encounter a parade of equally troubled individuals, including ghost-hunting priests, a robot magician, a discarded piece of furniture, a runaway teenager, and a Japanese rock star. As Garnet confronts her past, she begins to understand why someone might want to live forever.


“If you don’t mind, do you think you could get out of my car?”
Garnet thought it was a dream. She hadn’t had a dream in a long time.
“Um…” the placid female voice continued. “Are you even alive?”
Garnet didn’t know how to answer that. She felt something pinch her arm.
“I wonder how a dead woman got into my Prius.”
Garnet opened her eyes. She saw pink hair. She knew she was doomed.
Somehow Garnet wriggled out from the backseat floor. Her back hurt, so she focused on popping it and on smoothing down her skirt as she sat on the seat. She started fixing her hair, avoiding the stare of the girl kneeling on the seat beside her.
“I know who you are!” she pointed like a child pointing out a new toy.
“Mmm?” Garnet said, while holding a hair tie in her teeth.
“You’re Katherine Garnet.”
Kate let her hair fall. She gradually lifted her gaze from her lap to the person beside her. August had apparently lost all interest in her at this point. She was busy trying to scrape a strange orange substance off the driver’s side headrest.
“Yes, I’m Kate Garnet.”
No response.
“Think it’s cheese?”
“What?” Kate reeled.
She pointed at the orange stuff.
“But how would cheese get up here… I don’t even eat cheese…” August kept scraping.
“Um… so it’s very nice to meet you.”
“Oh! Nice to meet you, I’m August Prather,” she held out the hand she’d been using to scrape up the orange stuff and smiled. Kate shook her hand. “I thought I’d get you out of the car so you wouldn’t suffocate. That would be awkward. I have to go.”
August indicated the scene outside the window.
They were in the desert. They must have been driving for a long time. The sky stretched over the land and engulfed any idea of scale. They could be miles away from the nearest town. Or they could be days.
“Where are you going?”
“The church.”
Garnet hadn’t noticed it before. An enormous Gothic revival church in the middle of the desert, complete with bell towers, flying buttresses and stained-glass windows.
“I have to go to confession,” August sounded serious. “Want to come?”
Like she had a choice.

Danielle K. Roux is a writer, teacher, and historian. Her first novel August Prather is Not Dead Yet is currently available in e-book and paperback through Parliament House Press (and soon will be available in hardcover and audio book). Danielle has always loved reading and telling stories – especially stories with adventure, mystery, humor, romance and at least a little bit of spookiness. Not Dead Yet has all this covered, with a story-within-a-story structure and a quest for immortality in the early twentieth century paired with a present-day road trip. There’s a lot of existential crisis and a male/male romance that is sweet and steamy.

Danielle has been writing fiction since she was nine, after getting tired of reading from the perspective of white, straight male characters in fantasy novels. Her first written story involved a group of middle school girls who find necklaces used by a dead witch that give them supernatural powers. It was written in notebooks in purple and green gel pens that are currently housed in a box in her linen closet. She is inspired by travelling to new places and reading about the stories tied to landscapes. She has at least three novels building in her brain (or wherever novels come from) and wishes she was writing them all right now.

Danielle lives with her wife and two orange cats in the San Francisco Bay Area. She has added a lot of young adult fantasy fiction to her bookshelves recently, and regrets nothing. Her dream library would be accessed through a secret door and look something like the library in the animated Disney Beauty and the Beast, although it would also have a cute barista or sentient coffee machine that once was said barista.

When she isn’t writing or thinking about writing, Danielle is building houses in the Sims, listening to podcasts, or taking Buzzfeed quizzes to find out what kind of tree she is based on her hair color. She has recently been watching lots of old BBC period pieces, and some of them are good. She has begun to drink Diet Coke and is worried this might be a real problem. Coffee and tea are still her primary beverages of choice.