UFI welcomes Kelly Jensen Author of Less Than Perfect. Thanks for Joining us!!

My three favourite things in fiction are: apocalypses, aliens and love stories. It’s an odd combination and you don’t often find all three in one book. Aliens and apocalypses can skip hand in hand down a desolate road together, but the end of the world isn’t necessarily a great time to fall in love. But a heart wants what a heart wants, and there is something about flinging people together in circumstance and seeing how they fall together (or apart).

An apocalypse is usually going to be a trying circumstance. Most of us lead cozy lives and we’ve spent a number of years putting everything together. Do you ever wonder what it would be like to have it all taken away? In an instant or over the course of months as the world we know slowly crumbles around us. Do you have a plan? We know what to do in case of fire. There’s a system in place to help us out with that. But what if everything is on fire and there aren’t enough volunteers to fight the flames?

Gloomy premise, isn’t it? But that’s an apocalypse. The system breaks down and the world no longer works the way it’s supposed to. That’s when we have to fend for ourselves, which means playing to our strengths and, in some cases, figuring out who we are.

That’s why I love these sorts of stories. I don’t revel in the details of the end. What I am interested in is the after. What’s next? What sort of people will roam the wasteland? With our creature comforts destroyed, what or who will we turn to? Who will we become? What sort of future will we build for ourselves?

People love new beginnings; the first page of a journal or sketchbook, the opening chapter of a story, the first scene of a movie, a new house, a new town. A holiday can feel like that, too.

In my novella, Mikayla and Reg get to explore the beginning of their romance. It’s not the best time to fall in love, but finding someone to be with makes their journey less gloomy! Despite the fact everything is falling apart around them, they have something fresh and new in front of them. A reason to smile. The moments they take out for themselves become precious and that respite gives them the strength to move forward. They’re both strong enough to do it on their own, but isn’t it better to do something together?

That’s why I love love stories. There is always a reason to fight (or do more normal things in more normal circumstances!). But having someone to fight with, or for, is a very human need, I think. We’re a collective sort of species. We belong in groups and partnerships. We adore doing things for other people. And, it’s just sweet. Love is lovely.

Aliens, generally, are not lovely. But they’re so cool to write because anything goes! A writer is not restricted by the known, or what makes sense when it comes to aliens. That’s why I like reading and writing about them. They need to be a reflection of ourselves so we can relate to them. So, recognisable. But from there, you can do what you want. You can make an entire species with a quirk that makes little sense and build a world from there. Then, of course, there is the challenge of writing a world and a story that makes sense to the reader. It’s a logic exercise, I suppose.

What I love best about aliens in stories, though, is the ‘reflection’ I mentioned before. Aliens are different. The usual rules don’t apply. So we have to define them by what we know, which means we get a really good look at ourselves. Us, in all our imperfect glory.

If aliens ever do land on Earth, Kelly will not be prepared, despite having read over a hundred stories of the apocalypse. Still, she will pack her precious books into a box and carry them with her as she strives to survive. It’s what bibliophiles do.

Kelly Jensen lives in Pennsylvania with her husband and daughter. When she’s not busy being a mom, Kelly spends her time volunteering at the local library, playing video games, and studying Kiryoku, a martial art combining Shotokan, Aikido and Tang Soo Do.

Less Than Perfect is her first book. 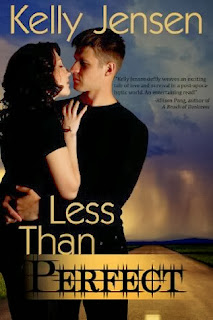 
Mikayla’s read every book in her collection of post-apocalyptic novels at least twice. She thinks she’s prepared for aliens taking over Earth. She’s not.

Nor is she prepared for the attention of a good-looking refugee named Reg.

All Mikayla and Reg want is a safe place to see out the end of the world, hidden away from the aliens that call themselves The People, but cities of the depopulated United States not infested with The People are rife with gangs, the detritus of civilization and disease.

On a mission to restock their supplies, Mikayla and Reg are captured by The People and prepared for the procedure that will make them perfect, but no longer quite human. In order to escape, they need to rely on each other…if Mikayla can trust a man who seems too good to be true.

Review: Magic and Loss by Nancy A. Collins 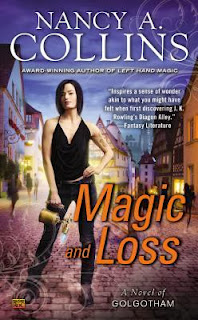 Located on Manhattan’s Lower East Side, Golgotham has been the city’s supernatural district for centuries. Populated by creatures from myth and legend, the neighborhood’s most prominent citizens are the Kymera, a race of witches who maintain an uneasy truce with the city’s humans...

It has been several months since Tate Eresby developed her new magical ability to bring whatever she creates to life, but she is still learning to control her power. Struggling to make a living as an artist, she and Hexe can barely make ends meet, but they are happy.

That is until Golgotham’s criminal overlord Boss Marz is released from prison, bent on revenge against the couple responsible for putting him there. Hexe’s right hand is destroyed, leaving him unable to conjure his benign magic. Attempts to repair the hand only succeed in plunging Hexe into a darkness that can’t be lifted—even by news that Tate is carrying his child.

Now, with her pregnancy seeming to progress at an astonishing rate, Tate realizes that carrying a possible heir to the Kymeran throne will attract danger from all corners, even beyond the grave...


Another great series comes to an end. I will keep this spoiler free.

There were some pretty emotional points in MAGIC AND LOSS. Hexe's attempt to repair his hand went horribly wrong and he did things and said things that any woman who didn't know him better would have run for the hills. It was definitely a dark point in the book but there are also happy things that were thrown in like Tate's job, meeting new family members and the birth of the baby. I was so excited at the end of book 2 when I figured it out. The pregnancy went by pretty fast with the time jumps but I never felt like I was left behind or that the situations didn't make sense. I do wish that more time was spent with the baby after they were born. I wanted to see more of Tate and Hexe as parents. We finally get the story behind how exactly Tate's Mom knows Hexe's Mom and I am so glad that was included in the book and I loved that Tate's Dad knew all about it and was never fooled.

I really enjoyed the Golgotham series.  It was different, fast paced and the world building was exciting to follow. I am sad to see it end but everything was tied up and put where they were supposed to be by the end.