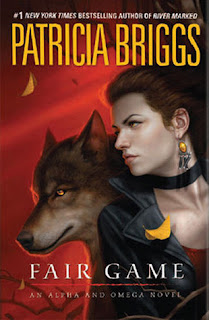 Patricia Briggs, the #1 "New York Times" bestselling author of the Mercy Thompson novels, "always enchants her readers." (Lynn Viehl, "New York Times" bestselling author) Now her Alpha and Omega series-set in a world of shifting shapes, loyalty, and passion- brings werewolves out of the darkness and into a society where fear and prejudice could make the hunters prey...

They say opposites attract. And in the case of werewolves Anna Latham and Charles Cornick, they mate. The son-and enforcer-of the leader of the North American werewolves, Charles is a dominant alpha. While Anna, an omega, has the rare ability to calm others of her kind.
Now that the werewolves have revealed themselves to humans, they can't afford any bad publicity. Infractions that could have been overlooked in the past must now be punished, and the strain of doing his father's dirty work is taking a toll on Charles.

Nevertheless, Charles and Anna are sent to Boston, when the FBI requests the pack's help on a local serial killer case. They quickly realize that not only the last two victims were werewolves-all of them were. Someone is targeting their kind. And now Anna and Charles have put themselves right in the killer's sights...


I absolutely love Patricia's Mercy Thompson series. I knew Patricia had another series in the Mercy world but had never picked them up to read them. That is until her publicist sent me a copy of FAIR GAME book 3 in the Alpha and Omega series. I went back and read the previous books and instantly became attached to both Anna and Charles. In book 3 the mated pair travel to Boston to consult with the FBI about a serial killer case they are working on which once again doesn't go as smoothly as they would have liked.

The best thing about the series to me is Anna and Charles relationship. They definitely have things to work out between them, but they have a really strong connection and I really love there romance and devotion to each other when either doesn't let his ghosts get in the way. They fit perfectly together and complement each other. I enjoyed the interaction between the wolves and the humans as they worked side by side to try and find the killers. I had absolutely no clue who the villain was and I loved every minute of getting to the point in finding out.

The emotion that Patricia is able to bring forth is excellent. One minute I'm happy as can be while something good is happening, or my heart is pounding with the situation trying to figure out what will happen and then the next I'm bawling my eyes out sad right along with the character. It is beyond easy to get lost in the emotions of the story. With all that Anna has been through its tough seeing her yet again become the victim of a psychopath but she continues to come out of these situations stronger then she went in.

You really should pick up the books in this series, I'm really glad I got a copy of FAIR GAME in the mail to review. The Alpha and Omega series has become a must have on my book shelf.

Giveaway is for a Signed Copy of On the Prowl which contains the very first Alpha and Omega story
Read more »
Posted by StacyUFI at 3:00 AM 24 comments: