Review: The Girl in Red by Christina Henry (@BerkleyPub) 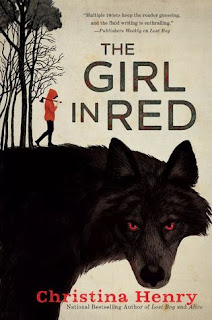 From the national bestselling author of Alice comes a postapocalyptic take on the perennial classic "Little Red Riding Hood"...about a woman who isn't as defenseless as she seems.

It's not safe for anyone alone in the woods. There are predators that come out at night: critters and coyotes, snakes and wolves. But the woman in the red jacket has no choice. Not since the Crisis came, decimated the population, and sent those who survived fleeing into quarantine camps that serve as breeding grounds for death, destruction, and disease. She is just a woman trying not to get killed in a world that doesn't look anything like the one she grew up in, the one that was perfectly sane and normal and boring until three months ago.

There are worse threats in the woods than the things that stalk their prey at night. Sometimes, there are men. Men with dark desires, weak wills, and evil intents. Men in uniform with classified information, deadly secrets, and unforgiving orders. And sometimes, just sometimes, there's something worse than all of the horrible people and vicious beasts combined.

Red doesn't like to think of herself as a killer, but she isn't about to let herself get eaten up just because she is a woman alone in the woods....


Red must survive the journey to grandma's house in this post apocalyptic retelling of Little Red Riding Hood.

I am a little on the fence about how I really felt about THE GIRL IN RED. I enjoyed the main character. I liked how prepared she was and how she was able to think ahead when others were only thinking about the next hour. I hate to say it, but her family was kind of annoying. They really should have listened to her more often. I didn't really understand the huge emphasis that was put on Red's race. Her being biracial was mentioned at just about every turn and made to be a really big deal when it wasn't. I just didn't really understand why it was constantly mentioned the way it was.

I really enjoyed the plot of THE GIRL IN RED. There was plenty of danger and I enjoyed the way the world evolved after the crisis hit. Having said that, there was a lot of info dumping throughout the book, but not enough info when I thought more info would have been useful.

The ending was a little lackluster. We seemed to get a lot of detail on her journey to grandma's house, but then we jump weeks, she's there and the book ends. No reunion, no nothing. Just a fade out when the house is in sight and she can smell her grandma's cooking. I was at least expecting her to knock on the door and have her grandma answer. I was left wanting.