UFI welcomes Author S.B.K. Burns. Thanks for Joining us!!

My hobby is taking pictures of the moon.

An excerpt from my second book FLY LIKE AN EAGLE (Philadelphia, 1824), from a scene where tomboy Samantha hikes out into the briars to see why her nesting hawks are in such a commotion only to observe Migizi (Eagle) swooping over the hills in his da Vinci-inspired hang-glider. Unfortunately, she doesn’t know what it is, doesn’t know it’s him:

The full moon, just rising and reflecting off the clouds, backlit the scene as the giant avian-like creature flew above the hill and into the moon’s disk, across Tycho’s crater, down over the distant clouds, and up again.

Below its wings—no, it couldn’t be—it looked like it had captured something in its talons. She distinguished what she thought might be a human silhouette each time the harpy crossed the moon’s bright disk.

Unable to get enough air into her lungs, she lowered the glasses and returned them to the pocket. Stepping back into the briars she heard a monstrous rip of fabric and nearly fell.

“Samantha, come back. Where have you gone?”

“Aunt?” The spell of the mystical bird broken, she’d never felt so overjoyed to hear her aunt, tipsy or not.

Barbs dug into her ankles and hands.

Her curious mind had gotten her into this state of confusion. And now she’d seen things so unbelievable, if she shared them, no one would ever take her, or her scientific ideas, seriously. Like that young British woman, Anning—she thought that was the scientist’s name. The discredited girl had claimed to have discovered enormous fossils from some monstrous creatures.

Perhaps the water Samantha had recently swallowed was infected.

Yet, her observations had always been sound.

But there was a monster. She’d seen it.

She let her breath out slowly, almost afraid there’d not be enough air outside to take another.

In the fuzzy distance, the moon had risen higher. Hands shaking, she fumbled into another pocket for her wire-rimmed spectacles and nervously placed the stems over her ears to stare one last time at the scene, maybe to convince herself she hadn’t dreamed the giant bird.

No birds, but a tiny oval skimmed slowly across the face of the moon, disappearing into the darker evening sky. Shaped like an egg, it lacked wings. Without wings, how did it not plummet to the earth?

***
The paleontologist of the early eighteenth century Samantha refers to in the above excerpt, Mary Anning , discovered the existence of dinosaurs, but wasn’t given credit until much later. In this way, I emphasize how women contributed to our scientific knowledge in my AGES OF INVENTION series of novels.

***
One morning I went out on my deck and looked with my large binoculars toward the Pacific. The full moon as it set was bright orange and, like the sun upon setting, changed its shape as its image refracted in the atmospheric layers above the ocean.

https://www.pinterest.com/snrubnasus/moon-shots/ I’ve set up a series of my moon photos (using my Dobsonian telescope, my Nikon camera with a 400 mm lens, and my large binoculars) on their own Pinterest page, so you can see how my moon-shot hobby has developed when I’m not writing. 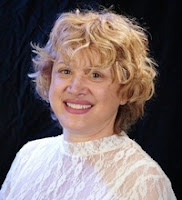 Both romance and science have been central to the life of S.B.K. Burns (Susan). As a teen, she wrote romantic musicals between quarterbacks and cheerleaders. After a career as both a science teacher and advanced degrees in science, she began a ten-year journey of paranormal romance novel writing. Her ten books include two series: LEGENDS OF THE GOLDENS (about psychic vampires that protect humans from the baddies, even when the humans are not too keen on getting saved) and AGES OF INVENTION (alternate science history/steampunk: where Electress Sophia of The House of Hanover (ancestor to today’s British royalty) runs a time machine where she helps our heroes and heroines save the great scientists of history. 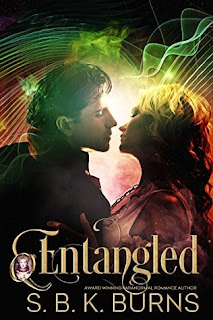 
She’s Hume’n, a member of the lower class, with one chance to change her life…

In an alternate, twenty-first century Boston, Dawn Jamison is a hair’s breadth away from earning her doctorate degree—a degree that would allow her entrance into the upper class, to become the unemotional and self-disciplined Cartesian she is now only pretending to be. To reach her goal, all Dawn must do is overcome her forbidden attraction to the Olympic-class weightlifter Taylor Stephenson who’s just crashed her lectures on past life regression. She must also teach her group of misfit students how to travel back into their past lives—and, oh, of course, figure out how to save the great scientists of the early eighteenth century before they’re inextricably caught up in a time loop.

He’s Cartesian, a member of the upper class, and supposed to know better…

Coerced by his politically powerful, wheelchair-bound brother into spying on Dawn’s past-life regression classes, Taylor knows better than to give into his desire to claim Dawn as his own. But his past-life entity, eighteenth-century Colin, has no such inhibitions. When Taylor and Dawn meet up in Scotland in the 1700s, all the discipline he’s forced on his twenty-first-century self disintegrates in the past, leaving only his overwhelming lust for Dawn’s past-life double, Lily. Unable to escape their sexually obsessive past, Dawn and Taylor find themselves in a race against the clock at the epicenter of a world-altering time quake of their own making.


Before Dawn had finished the second suggestive sentence of her self-regression, she was here in the misty Lowlands of Scotland, not far outside Edinburgh. As on her previous trips, she was literally in Lily’s body, experiencing all the woman’s senses and emotions, but none of her thoughts. So frustrating. 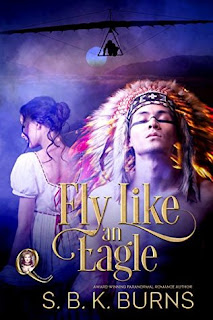 
It’s 1824 Philadelphia at the opening of the Franklin Institute of Science, and one of its founders, Samantha’s father, wants her to marry his business partner, a much older man, to keep their war industry dealings secret.

Looking for a way out of the arranged marriage, tomboy Sam finds it in Eagle, the half Native American son of the man she is to marry.

Eagle brings Samantha into his spiritual world, his bimijiwan, in order that she might stop their father’s preparations for an ironclad Civil War at sea. To do this, Sam might have to convince Benjamin Franklin to abandon his kite experiment.


Samantha had most probably escaped to the house. Migizi (Eagle) would return her shawl, hoping by the time he caught up to her, she would have put on something a little less fetching.
Her father had been wrong about him. Leaving me alone with Ronaldson’s nubile daughter? Look at her as a sister? He’d have more success taking flight by jumping off a cliff and flapping his arms.