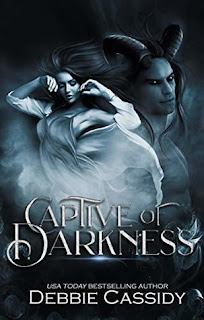 A century old curse forgotten by time. A sleepy town cut off from the world by an ominous chasm. And a girl with the heart of a warrior.

The town of Justice Falls is slave to an annual tithe, but only those with the sight recall the true price of survival. As one of the gifted, Wynter Ashfall has made peace with the curse, for when the silver riders climb out of the chasm in the dead of winter, there is no force on earth that can stop them from claiming their cargo.

But when the man who holds her heart is marked, there is nothing she won’t do to get him back, even if it means climbing into the pit itself. With Death as her guide she must navigate a realm forbidden to the living, a place where every creature hungers for her soul and nothing is as it seems.

In a world where time has no meaning, time is running out, and Wynter must make a choice— finally claim her heart or find the courage to let it go.

A dark fantasy with horns and teeth, Slavic gods and immortal fey.


While CAPTIVE OF DARKNESS started out strong, it lost my interest about 1/3rd of the way in and I had a hard time staying in the story.

I really wanted to love CAPTIVE OF DARKNESS. Wynter really caught my interest early on and the story pulled me in, but when she went into the 'forbidden realm' the storyline lost me. I found Wynter's constant lack of following directions a bit annoying at times and I didn't really connect with Veres' character. I'm not quite sure how I would feel about them really being together romantically. I liked Finn and could definitely relate with his and Wynter's relationship, but there wasn't enough of Finn in the story to really get a feel of how they would be together romantically even though they already love each other and they make sense.

I didn't HATE the story. In fact I found a lot about it interesting. I think I just didn't totally GET it. I was a little confused at times about what was happening and I don't think there was enough information given about Veres and the realm that they were traveling through. The pacing also seemed off to me. Some points dragged and other times felt rushed.

Going into my review I was going to give CAPTIVE OF DARKNESS a 2.5, but I realized that I kinda want to see what happens next and to find out more about Veres and his realm SO, I'm round up. There is potential here.