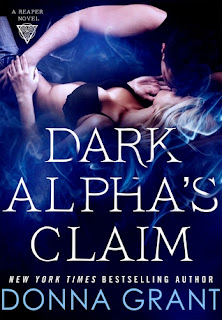 There is no escaping a Reaper. I am an elite assassin, part of a brotherhood that only answers to Death. And when Death says your time is up, I am coming for you...

My whole existence is based on taking what Death wants. Born to eliminate Fae guilty of unforgivable crimes, my reckless, wild nature makes me the perfect assassin to carry out Death's bidding. I've seen more sinister and violent dealings than anyone could ever imagine. But it was the sight of her face that stopped me cold. I've never wanted a woman-never mind a human-so badly; never felt my heart, hardened by death, burn brighter and hotter until it burst into flames. She is everything I desire. The kind of woman that compels you to stake your claim on her, to let the world know that she's yours. A Reaper saving her life will only attract danger, but I vow to protect her at all costs from the Fae that hunt her, and keep safe the woman who has claimed me, body and soul.


The blurb for DARK ALPHA'S CLAIM pulled me in and since I've read quite a few of Grant's other series I figured I would enjoy it. Even though Grant's Reaper series is new, there are many mentions of characters from previous series. I don't think everyone will be confused or feel like you are missing something, but if you want to learn more about the world and the characters you might want to backtrack and read through the other three series that take place in the same world. Because there are so many books to get through, I don't see many new readers doing that though.

Since DARK ALPHA'S CLAIM is a paranormal romance, I will start with the romance. It was hot, but I expected nothing less of a Donna Grant book. The heat kicks off pretty quickly between Baylon and Jordyn and it never simmers down. It's insta-attraction and insta-love and Grant pulls it off with ease. It's pretty clear from the start—even though Baylon insists at first that he will walk away from Jordyn—that both would do anything for the other and they can't possibly live life without the other there. I thought Jordyn fit in with the other Reapers with ease. Speaking of the other reapers, I already have my favorites and I just might pick up book two if one of them are featured.

So why only 3 stars? There was a few things. There are a LOT of characters right off the bat. It makes it very hard to keep them all straight and it also makes it a bit hard to get to know them all. On top of that I had a hard time staying in the story and it just felt like something was missing and I couldn't figure out what it was.