Read more »
Posted by StacyUFI at 3:30 AM No comments: 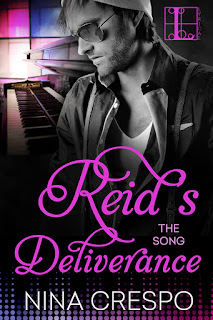 
Can their bond withstand the test of time?

Lauren isn't looking for love when she spends a scintillating night with Reid, the sexy keyboardist of Thane's Redemption. While their passion may be off the charts, her trust issues--and Reid's secret life as a time-traveling covert agent--makes any chance for a relationship impossible.

When operatives involved in a mysterious project begin dying, Reid defies orders and travels alone into the future to find the cause. But when things go dangerously awry, it takes all of his strength to get himself back to safety--and directly onto Lauren's doorstep. While neither of them remembers their night of passion, their intense connection leads Lauren to help him. But as Reid's memories reignite, will he be forced to sacrifice everything to finish his mission--including the woman he loves?

Pre-Order this title at these online retailers:
Amazon  |  B&N  |  iBooks |  Kobo | Google Books
Add it to your TBR today!

Laughter came from the stage.


The members of the band were breaking down their equipment and talking with fans. A group of women surrounded the keyboardist. One of them wore a tiara and a “Finally 21!” sash over a form-fitting, pink minidress. He draped an arm around her and posed for pictures. The redhead practically swooned. Who could blame her? Six years ago, at that age, she would have done the same. His wide shoulders were made for holding onto, and the way he filled out those jeans screamed hot body. Not to mention that orgasm-inducing grin. He turned up the wattage on said grin and chatted with his admirers. At least a ten-year age difference existed between him and the birthday girl. The way he flirted with her and her friends, maybe he preferred to date younger.


His eyes locked on Lauren. Even from a distance, she could see his gaze roaming over her from head to toe and back up again. He smiled and her short, white dress grew as warm as a parka. Caught staring, could she look more pathetic?


Steps from the exit, a drunken guy staggered into her path. An abrupt halt left her teetering in her stilettos. A strong, masculine arm wrapped around her waist. Lauren’s heart jumped.


“Careful.” His breath ruffled the hair near her cheek. “I’ve got you.”


People squeezed by to get to the door. She didn’t budge. The keyboardist’s clean, woodsy scent surrounded her as she leaned against hard chest muscle.


“Time to move. We’re about to get trampled.” He rested his hand on her back. Confidence and his long stride sliced through the crowd. They walked out and moved to the side of the door.


Too much space allowed cool night air to steal his warmth. Exhaust fumes from departing cars snatched away his appealing scent.


More people piled out of the club.


He turned his back to the door. Lights near the awning illuminated the clean-shaven lines of his face. “I’m Reid, by the way.”


Intense hazel eyes robbed her of speech. Her, lost for words? That never happened. “I’m Lauren.”


“Nice to meet you, Lauren. So, are you coming to the after-party?”


Across the parking lot, Ari begged and stamped her feet. Inches shorter than Celine, she resembled a child throwing a tantrum.


“My friend Celine is tired. She wants to go home.”


Reid stepped into her space. Close enough for warmth and deliciousness to return and kick up her heart rate. “What do you want?”


To stay out of trouble.


After three failed relationships in five months, she was taking a break from men, dating, the whole shebang. “It isn’t about what I want.”


“When we’re out together, if one of us doesn’t want to do something, we all take a pass.”


He flattened her hand to his chest. “You’re breaking my heart. I can’t believe fate brought you to me tonight just to take you away.”

Read more »
Posted by StacyUFI at 3:00 AM No comments:

At Blade's Edge (Goddess With A Blade #4) by Lauren Dane

When Ruby discovers what really happened the night of Alan Beauchamp's murder, one thing becomes very clear: time is running out for the people she loves. As she unravels the web of lies and deceit around her, Ruby reveals an unthinkable truth. One with dire repercussions for all.
Can Ruby pull together all the supernatural aspects of her life to foil a diabolical plot, or will she fall victim to an evil unlike any other she has faced?

Haven't started the Caged Series yet? Caged is currently FREE!

FREE on Amazon
FREE on iBooks

"I stood in the middle of the room, unmoving – I barely breathed. My life had just become surreal, impossible, and one enormous lie. I needed to go, to run somewhere, anywhere to beat back the reality that was rapidly closing in around me. The image of him was burned into my retina, flashing over and over again like a warning. He was trapped somewhere between human and decidedly not, and I realized that was my new reality. I was too."
After the death of her parents, Ruby awakens from a lifetime of shadows and finds herself alone, thrust into a world of lies, deceit, betrayal and the supernatural.
As her quest for truth continues to come up short, she realizes that maybe some questions really are best left unanswered.
When her true identity is finally unveiled, she is forced to choose between two of the mysterious men who continually seem to crop up in her life.
She chooses poorly.
Now abandoned, Ruby must learn to call on the darkness within to survive, or spend a hellish eternity imprisoned because of it.

If you're dying to know more about me, allow me to put you at ease. I'm a sharp-tongued, sarcastic cancer, who loves vegetable smoothies, winter storms, and the word "portfolio". I should NEVER be caffeinated, and require at least eight hours of sleep to even resemble a human being. At thirty-four, I just now feel like I can keep a straight face while saying the word "rectum" (which is actually a huge lie because I just laughed out loud while reading this to my husband). I live with my iPod firmly affixed to my body, drive too fast, and laugh/cry at inappropriate times.