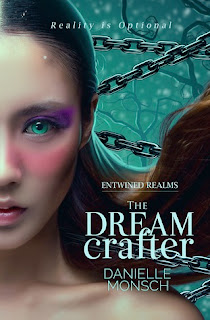 
A Legendary Spellbook. Everyone desires it, but he controls it.

The most feared mercenary in the New Realms, Merc takes what he thinks is a routine job – guarding a magic spellbook until a secret auction takes place, one where only the most powerful and influential will have the opportunity to bid. But one moment of carelessness makes this job the most personal he has ever had, and if that wasn’t enough, his dreams are being invaded by a woman who his every instinct warns is trouble, but he can’t stop wanting.

A Legendary Power. Everyone covets it, but can she master it?

One moment of terror took away Amana’s security and her brother’s freedom. Now her life is doing whatever she must to survive, all the while trying to find the way to release her brother from prison. Her answer comes in an offer from the Guild, but the cost is high – using a power she has kept locked away on a man who terrifies her even as he fascinates her.

As the auction draws ever closer, Merc and Amana are drawn into a game of cat-and-mouse, captor and captive as they battle for control, even as they work together to thwart the various factions who are willing to do anything to collect the spellbook for themselves. While grudging respect and mutual desire begin to shape their relationship, in the end, only one can prevail. What will be the ultimate decision, when the price of victory means the end to the other’s dearest dream?

A lot of action, a sexy romance and a world full of interesting is waiting for you between the pages of THE DREAM CRAFTER.

Amana is a very rare Dream Crafter who has no idea how to use her powers or what they mean for her and her future. Merc is an extremely powerful and feared mercenary in a bit of a bind. He has a very sought after spellbook and he never expected the beautiful woman in his dreams to steal it right from underneath him. Amana and Merc have a bit of insta-love going on before they officially meet in person and then the crap hits the fan. They end up on the run together (well she is kinda kidnapped, but what does that matter? lol) and the connection never wanes, but it takes them a bit of time to get comfortable and hot with each other.

The world is pretty neat and filled with all different types of people. The story flowed nicely from scene-to-scene, but there were quite a few things that were a little too easy for my liking. I was really hoping to get some sort of update from the couple in book one, Larissa and Terak, I would have loved to see how they are doing. We do get to see a few familiar faces, but I really hope to see all the couples in the same book at some point in the Entwined Realms series.

I think the Entwined Realms series has a nice blend of fantasy and romance going on and I plan on following it into book 3.