UFI welcomes Holly Hunt Author of  Blood Moon. Thanks for Joining us!!

This is Holly Hunt. I've taken over the recordings from Olivia, until such time as she can stick to the script. Don't bother sticking your finger up at me, girl, it isn't going to help you.

For those of you playing along at home, I'm here to talk to you all about what inspired the scribbling down of this story originally. For those of you who stumbled upon this and don't understand what's going on, head over to Amazon.com and nab yourself an e-copy of the book. Read it (shouldn't take more than an hour, if you're not a flit-about like me), then join me. You can follow the progress of the blog tour by heading over to my website
over here
and click the link to any of my blog-stops that takes your fancy. Trust me, it's worth the energy. If you keep following to the end of the tour, you could even win awesome prizes!

Okay, enough of the plugging. Time to get down to business.

What was the inspiration behind Blood Moon?
Blood Moon was written in 2010, in response to a situation I had with a publisher. After picking up an acceptance for The Devil's Wife, my debut book, the company went under, and I was understandably mad. It was the first yes I'd ever received, and to have it snatched away by circumstances had me plotting my revenge. The company was based in Canada, around the area that the Ontario Wolf first appears.

Why did you lay it out like that? Why so many newspaper clips between chapters?
I've had people on both sides of the argument for this. Some people, after reading it, are like, 'Yeah, they give a greater view of what's happening in the world around the wolves! They're awesome!', while others are like, 'Seriously? I mean, seriously? You could have gotten away with just one or two, you didn't have to fill the book up with them. They're useless!'. So, it depends on what camp you're in, how well you view them.

Me, I like them. I'm in the camp of 'They're awesome!'. I haven't read many apocalyptic stories that give you the birds-eye view of what's going on – you see it through the eyes of the main character, and that's fine. But sometimes you wonder what's going on in the rest of the world. I decided to make that happen.

The most important question: When will the sequel be released?
At this stage, there is no sequel. I know those of you who've read it are dying to know what happens next, but there's no sequel on the cards (yet). It's up to you to figure out who wins the war (if you want to rant about it, and win prizes, go to my website from March 27 and leave me your feedback on the form – then you get the best of both worlds!).

I look forward to dodging much rotten fruit and cursing in my next stop-over. But, for now, the next of my articles will be about Angela and Charlie, and the roles they play in the story – and just why no one seems to bat an eye about Wilhelm having a mistress.

An author living in Canberra, Australia, Holly Hunt writes a collection of works including Sci-fi, Fantasy, Horror and Romance. Currently undergoing an apprenticeship in Butchery, Holly spends her days off writing and watching superhero cartoons. 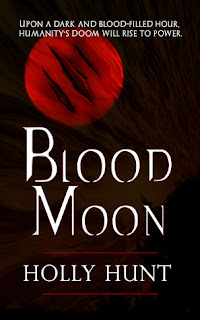 Upon a dark and blood-filled hour, humanity's doom will rise to power.

Werewolves are real. They haunt the woods of North America, feeding on the bodies of humans stupid enough to blunder across their paths. Once rogue and uncoordinated, the rise of their goddess Alsvinth has brought them all together, with one goal: destroy as much of the species as necessary to enslave them within meat farms, to feed the werewolf army taking over the world.

Olivia, a werewolf from western Canada, and her brother Charlie set out to kill the goddess and save humanity.

But can the werewolf and human destroy the goddess's power, or will she prevail and turn the planet into a wasteland? 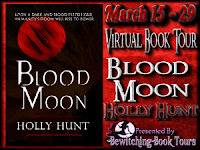