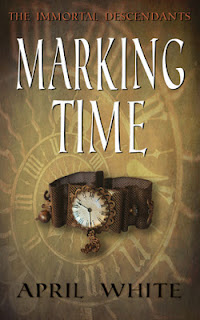 Seventeen-year-old tagger Saira Elian can handle anything... a mother who mysteriously disappears, a stranger who stalks her around London, and even the noble English Grandmother who kicked Saira and her mother out of the family. But when an old graffiti tag in a tube station transports Saira to the 19th Century and she comes face-to-face with Jack the Ripper, she realizes she needs help after all.

Saira meets Archer, a charming student who helps her blend in as much as a tall, modern American teen can in Victorian England. He reveals the existence of the Immortals: Time, Nature, Fate, War and Death, and explains to Saira that it is possible to move between
centuries – if you are a Descendant of Time.

Saira finds unexpected friendships at a boarding school for Immortal Descendants and a complicated love with a young man from the past. But time is running out for her mother, and Saira must embrace her new identity as she hides from Archer a devastating secret about his future that may cost him his life.


Yes I am going to say it again. I know I sound like a broken record. I should really know better by now. Sigh .... I didn't think I was going to enjoy MARKING TIME and I ended up not being able to put it down. There I said it, review done! j/k I will tell you more.

I had absolutely zero issues getting into MARKING TIME. Time travel is not usually my thing but this was nothing like I was expecting it to be and the time travel aspect made it all the better. I found the book to be pretty fast paced with a nice flow. I was never confused at where we were in the book and it doesn't skip around like I thought it might. There was a great alternative spin on Jack the Ripper used by the author and the history was fun. There was a lot of details to learn but noting overwhelming. The characters were interesting and engaging. Saira was someone I would love to be friends with and her friends provided a great support system. I do not want to mention too much else for fear I might give away something that was important to your thought process while reading so I will leave you with that.

I can not imagine how many books I have passed up on thinking that I was not going to be able to enjoy it. I am happy that MARKING TIME was one I said yes too, I really enjoyed Saira's journey as she found out who she really was. I'm excited about the series now and hope that book 2 is just as good.