Winner: In the Dark of Dreams by Marjorie Liu

Thank you to everyone who entered!!
Prize: Print Copy of In the Dark of Dreams

The Winner chosen by Rafflecopter is.....
Read more »
Posted by StacyUFI at 1:41 PM 1 comment: 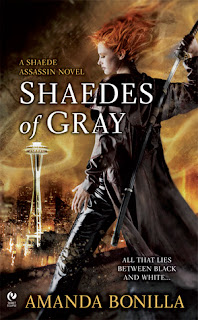 
In the shadows of the night, Darian has lived alone for almost a century. Made and abandoned by her former love, Darian is the last of her kind-an immortal Shaede who can slip into darkness as easily as breathing. With no one else to rely on, she has taught herself how to survive, using her unique skills to become a deadly assassin.

When Darian's next mark turns out to be Xander Peck, King of the Shaede Nation, her whole worldview is thrown into question. Darian begins to wonder if she's taken on more than her conscience will allow. But a good assassin never leaves a job unfinished...


Darian is a shade, she was abandoned by her love without any idea of who or what she really was. After her love disappeared she decided to use her shade abilities to her benefit and became an assassin for hire only going after bad guys.

I had no issues connecting to the story. The action kept me reading and there were some great twists thrown in along the way. We quickly jump into SHAEDES OF GRAY getting to know Darian's personality. She is self reliant, Strong, hides in plain site, doesn't take crap and has a snarky personality about her.  She also has no idea what she can really do and who she really is, doesn't show her true feelings and refuses to let people get close to her. Darian is given a job and finds out quickly that this one isn't like any other she has ever taken. She finds out that what she always thought was the case is far from the truth and is thrust into a world she has secretly longed for and at the same time wants no part of.

The world was easy to follow along to and the characters were all unique and full of personality. One of my favorite characters was Raif the warrior who ends up being a great supporting character through out the story. He was loyal, honest and he made me laugh a number of times and really knew how to kick @ss.

SHAEDES OF GRAY does have a blooming romance along the pages. Tyler isn't what Darian thought he was and she has pushed him away while wanting him close for a long time. Tyler makes his feelings for Darian well known from the start and is very protective of her even though she can very well take care of herself. I enjoyed following as they grew closer and watching Darian fight against herself for her happiness.

SHAEDES OF GRAY was my kind of Urban Fantasy I was hooked from page one and I cant wait for book 2 BLOOD BEFORE SUNRISE to come out.

Winging It (The Dragon Diaries, #2) by Deborah Cooke
Thur Dec 8
Shattered Souls by Mary Lindsey
Let me know if you see any mistakes or see anything missing =) Happy Reading!!
Posted by StacyUFI at 2:59 AM No comments: