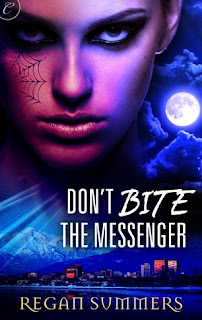 
Anchorage, Alaska
The vampire population may have created an economic boom in Alaska, but their altered energy field fries most technology. They rely on hard-living--and short-lived--couriers to get business done...couriers like Sydney Kildare.
Sydney has survived to the ripe old age of twenty-six by being careful. She's careful when navigating her tempestuous clients, outrunning hijackers and avoiding anyone who might distract her from her plan of retiring young to a tropical, vampire-free island.
Her attitude--and immunity to vampires' allure--have made her the target of a faction of vampires trying to reclaim their territory. Her only ally is Malcolm Kelly, a secretive charmer with the uncanny habit of showing up whenever she's in trouble. Caught in the middle of a vampire turf war, Sydney has to count on Malcolm to help her survive, or the only place she'll retire is her grave...

Sydney is a courier for the vamps and I found her job to be fun and exciting. I could so picture people doing that and it was fun to learn how she had to change her appearance all the time and keep her real identity a secret. The opening scene was full of action as she raced to complete a run so that we got an instant taste of her job. Sydney takes her job seriously and kinda lives the part but she is still down to earth and easy to like. Because of her job she hasn't really had time for romance but Malcolm and her have instant attraction that shines through the pages. They didn't immediately jump each others bones or fall in love which was nice.The story is pretty short but its filled with action, was fast paced, and it felt complete.


I'm kinda hoping to see more of Sydney and Malcolm. The story ended well and I was satisfied with the ending but I think they would be super fun to follow on their next journey so I would definitely read more.