UFI welcomes Author Amy Foster. Thanks for Joining us!!

I am a hardcore knitter. I have been knitting for fifteen years and I knit EVERY day. Even if it’s just one row.

Apart from the knitting?! I read a lot. I work out every other day (I hate it, but I like to eat). I watch a lot of TV. Basically, I have the opposite of ADD. I can sit in the same position doing nothing for hours. Like a cat.

For me it’s about the story. I have an over active imagination so writing the story down is like letting the pressure out so I can fill it back up again with more crazy plot ideas.

I bought a condo ten minutes away from my house. This is my own private place (visitors are highly discouraged) where I can write for hours at a time uninterrupted. It’s not a routine exactly but, it’s become a necessity.

How would you pitch The Rift Trilogy to someone who has not heard of it before?

It’s about a teenage super soldier guarding a portal to the multiverse and her ever growing awareness that she and all her fellow teenage soldiers are probably the last people on (this) Earth who should have such an important job.

Can you tell us a little bit about the world that The Rift Trilogy is set in?

Well, it’s not Dystopian. It really irritates me when people call it that! It’s Crypto Historical which is a great genre term that people don’t use enough IMHO. Basically, it means that everything is business as usual in the world except there is this whole other thing that’s going on that no one knows about- sort of like Harry Potter. The first book in the series is about the protagonist uncovering a portion of the truth about her origins. In the second book, Ryn goes through the portal and into the multiverse and the book kind of switches things up and becomes more fantasy. The final book is about how she’s going to get her life back and how far she’s willing to go to do that.

Do you have a favorite scene in The Rift Trilogy ?

In the second book, The Rift Frequency, Ryn lands on an Earth where the Roman Empire never fell. That was a blast.

Ryn is always going to be my favorite. She’s like another daughter to me which is why it was EXTRA weird when I had to write the sex scenes- So while I do believe the sex scenes ended up being pretty hot, it was just awkward to write them. I would like, blush, leave the room, scrunch up my eyes, cover my face…

I’m working on another series but it’s early days and I don’t want to jinx anything!

“When Autumn Leaves”, Amy’s first work of fiction was published by The Overlook Press in September 2009.   Currently, Amy lives in Portland, OR with her husband Matt Freeman and their three children, Mikaela, Eva and Vaughn. Her next release is, the first in The Rift Trilogy, for Harper Collins is coming to a bookstore near you in the Fall of 2016. 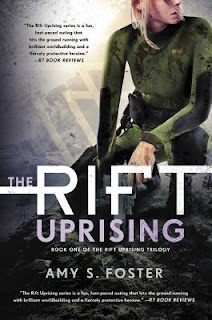 
Heroine Ryn Whittaker isn’t like other teenagers who Instagram and binge-watch Netflix. She’s a genetically modified gun-toting take-no-prisoners super-soldier, designed to protect The Rifts, a series of fourteen mysterious portals that lead to a billion alternative Earths. Foster’s fantastical narrative both transports and inspires - it’s imaginative and challenging, with a badass, brilliant, break-neck heroine expressly created for the authors’ daughters. She’s chockful of character traits YA readers will both adore and adopt, using her innate combat skills to guard, and fight, whatever materializes out of The Rift, from mutants to advance humanoids.

Then there’s the guy thing…. When otherworldly Ezra Massad appears, he pierces her emotional armor.  He also turns her worldview on its axis, questioning The Rifts themselves, and the entire structure of their society, leading to uncomfortable, even dangerous answers. Ryn and Ezra are pivotal in starting a coup; in the ensuing fray, he vanishes back into The Rift. Ryn launches a plan to rescue him. But he could be anywhere in the world… on millions of worlds…  Here Foster delivers an incredibly cinematic, pulsing book with a breakneck pace, with unforgettable action sequences led by an unforgettable leading lady.