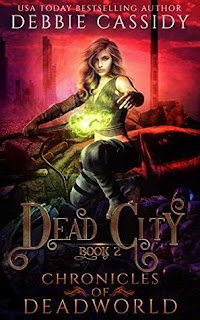 How many times can you cheat death? I’m not sure but I have a feeling I’m about to be tested.

First there were thirteen and now there’s only one. But the responsibilities don’t lessen. Bring the Harvest in, they say, take the soul orb to Haven, they order.

One of me, and too many places to be. Like hell am I putting my ass on the line without back up.  Because Genesis is out there, and it’s not done playing, and if I die, the Hive dies.

But a team can’t shield me forever.

Some paths must be walked alone, and when I’m forced to play soul courier it will have to be a journey that’s taken solo.

The Dead Zone awaits, and Death is calling.


DEAD CITY moves at a fast pace with lots of danger involved at every turn. Debbie continues to do a good job of cramming a lot of things and events into a small number of pages without making you feel like things are being hurried along.

DEAD City was just as character driven as DEADWORLD and it was neat getting some more time with characters from other series in the same world. Some I like more than others, but it's still neat getting to know their future selves. One of the issues I had with DEADWORLD was that there wasn't a lot of focus on Echo's siblings. DEAD CITY definitely does a better job at addressing what is happening with them.

The harem has definitely been started in DEAD CITY. There is a bit more romance involved in DEAD CITY as well as a little more time involved with building the relationships between the harem members. Still a long way to go, but it's moving along.

I look forward to seeing what Debbie has planned for Echo, her men and the world.