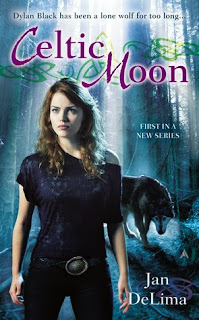 Sophie Thibodeau has been on the run from the father of her son for more than fifteen years. Now her son, Joshua, is changing, and her greatest fears are about to be realized. He’s going to end up being just like his father—a man who can change into a wolf.

Dylan Black has been hunting for Sophie since the night she ran from him—an obsession he cannot afford in the midst of an impending war. Dylan controls Rhuddin Village, an isolated town in Maine where he lives with an ancient Celtic tribe. One of the few of his clan who can still shift into a wolf, he must protect his people from the Guardians, vicious warriors who seek to destroy them.

When Sophie and Dylan come together for the sake of their son, their reunion reignites the fierce passion they once shared. For the first time in years, Dylan’s lost family is within his grasp. But will he lose them all over again? Are Joshua and Sophie strong enough to fight alongside Dylan in battle? Nothing less than the fate of his tribe depends on it…

Pregnant and feeling like a prisoner Sophie took the chance and ran from her husband and his pack to protect herself and her son. 15 years later she finds herself running back into her husbands grasp. Dylan has been looking for Sophie since she left. He thinks about her and his child constantly. When she calls him for help he says anything to get her back where she belongs.

Sophie does not return the same person she was when she left. I loved her "Don't f*** with me or my family attitude". She had NO issues sticking up for herself, her mom or Joshua and I loved every second of it. I also loved that she put her child before her own fears. She did not hesitate to rush back into a pack that did anything to make her feel unwelcome and pushed around. As for Dylan he is the definition of alpha male. He is stubborn, bossy, protective and beyond sexy. He did not handle things well in the past and he finds himself making the same mistakes now. He is manipulative and jerky when he could be open and loving and get a better outcome. There is a lot of trial and error on his part and he eventually discovers where his mistakes are when dealing with his wife. Sophie and Dylan have tons of chemistry and I liked how everything revealed itself and played out.

CELTIC MOON was a great start to a promising series. I enjoyed the character development and the rise of conflict that will span the series. DeLima did a great job introducing her characters while also growing them and introducing the storyline and their past. The blending of Celtic mythology and the wolves history blended well and kept me reading. I'm excited to learn more.