What can you tell my readers about yourself that they might not know from looking on your bio or reading in another interview?
I like to collect hobbies. I like to start new projects, this mean collecting and organizing items for craft projects even if I don’t get to them right away.

What do you enjoy doing on your down time?
Reading and watching Anime.

What is your Favorite part of writing?
The unexpected developments that happen when I am writing.

Do you have any certain routines you must follow as you write?
I have to have pretzel sticks and do a three-tier drill down to map out scenes.

What are some of your Favorite books or Authors in the Urban Fantasy/ Paranormal Genres?
Laurel K Hamilton, Patricia Briggs, LA Banks, and Shelley Laurenston

How would you pitch Bewitched and Bewildered to someone who has not heard of it before?
If you like strong quirky women butting heads Alpha males this may be the series for you.

Can you tell us a little bit about the world that Bewitched and Bewildered is set in?
There are four hidden paranormal pillar cities in the contemporary United States that serve as the backdrop for the books and each city embodies the positive aspects of their founding race.

Do you have a favorite scene in My Defender?
I love Meryn’s new shenanigans.

Which one character out of all your books was your favorite to write about? What about the hardest to write about?
Meryn is always my favorite. Adriel because he is a closed off character who wouldn’t come out of his shell even for me.

USA Today Best Selling Author, Alanea loves reading almost as much as she loves writing. She began writing at a very young age, some of her first scribblings are treasured in a keepsake box and written in green marker. She started when she was still in grade school and continued on through college.

She believes that love truly conquers all and that everyone no matter what, deserves a chance at that love and a place they can call home. She absolutely loves to hear from her readers so don’t hesitate to reach out to her. As always, her promise to her readers remains, “If you keep reading, I’ll keep writing!” 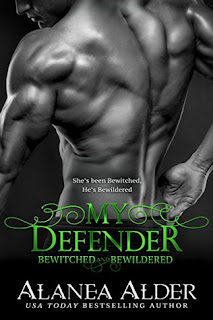 
When a mysterious illness begins to sweep through Noctem Falls affecting the children, Eleanor Kimball is called to the city to see if she can determine what is wrong. As a pediatrician Eleanor loves children and desires many of her own, however, after several dating disasters she has not only sworn off men, but has given up her dream of a family, and the promise of a destined mate.

After discovering Grant in Noctem Falls she is faced with her own insecurities and finds it hard to believe in his love.

Grant Douglas is a man of few words and doesn’t do well surrounded by others. He is scared to death of finding a mate. He believes the harshness of his past, where he struggled to survive, didn’t cultivate a gentle heart. After a series of terrifying nightmares where his mate is at risk, Grant has decided he doesn’t want a mate at all.

When he meets Ellie, he realizes there are some things worth fighting for. Even if it means putting himself out there by becoming the Alpha he was born to be and facing the power he desperately tries to hide.

As Ellie starts to believe in Grant’s love it will take every ounce their combined strength to discover why the shifter children are suddenly falling ill before it’s too late.