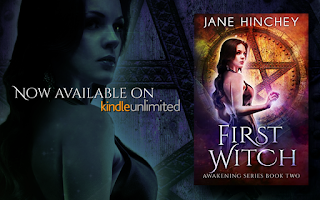 
Sometimes being a psychic vampire can, well, suck. And since Georgia was turned by her sexy hybrid boyfriend Zak, she’s been wallowing in regret. But when her long absent Aunt turns up on her doorstep, convinced that Georgia is a witch, she has to pull herself together.
In the meantime, the Witch Hunter has woken and he wants nothing more than to obliterate every last witch from the planet. Starting with Georgia and her Aunt. His plan of attack? Take control of Zak’s body.
Zak not being himself has put a serious crimp in her sex life, but there are other things to consider, like how to create the mother of all spells that will immobilize the Hunter – and save a coven of witches. To find the answers she seeks and recover what she’s lost will take all of Georgia’s courage and a touch of the power she feels flowing like electricity through her veins, but she’s up to the challenge.
First Witch is the second book in Jane Hinchey’s paranormal romantic suspense series, Awakening. If you like sexy vampires, sultry witches, and kickass action, you’re going to love First Witch.

Aussie Author Jane Hinchey writes sexy, snarky, badass, paranormal romances and urban fantasy novels.
Living in the City of Churches (aka Adelaide, South Australia) with her man, two cats, and turtle, she spends her days writing fantastical stories full of dark sexy vampires, hot shifters, sexy aliens, jaw dropping demons, sinful angels, and magical witches – and while they can be snarky and swear a lot, they mean well and you’ll grow to love them. Honestly.
When she’s not in her writing cave she’s usually playing the Sims, Civilizations or something similar, binge watching Netflix or upping the ante in the crazy cat lady stakes. She loves to hear from her readers, so swing on by her website at www.janehinchey.com and say hi.