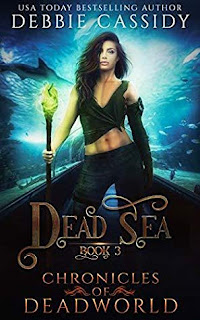 When war knocks on the door, burying your head in the sand won’t make it leave.

Death called and I answered. Now Genesis is coming for us. But with the council making every excuse not to listen to my warnings, there’s no other option but to plot behind their backs.

The sea kingdom awaits, and the sea king isn’t the kind of man to accept a rain check. It means the guys and I will need to hold fire on our plan to pinpoint Genesis’s location.

Let’s just hope that the shit stays away from the fan until my return… Let’s hope it doesn’t follow me.


DEAD SEA felt like it flew by. Everything happened at a fast pace with a lot of action.

As the hive continues it's downhill slide, Echo is sent to the sea kingdom. I really enjoyed the world development of the sea kingdom. I could visualize as the story progressed and it made it that much more enjoyable to read about it.

The harem seems to be moving along. As for the addition to the harem, I'm not sure about it yet. He seems like a nice guy, but I wish we could have learned more about him and got to know him better before he was thrown into the mix of men. The way he was added works in his favor though.

DEAD SEA wasn't my favorite of the series. Some of the events that took place didn't feel like they were leading anywhere. I am hoping book four clears that up for me.