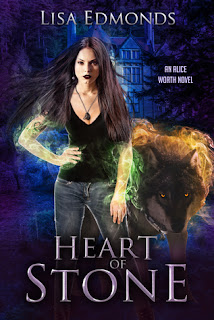 Five years ago, mage private investigator Alice Worth escaped her grandfather Moses Murphy’s organized crime syndicate. Now, her grandfather’s war with local boss Darius Bell has drawn her out of hiding and put her in the crosshairs of not one but two merciless crime lords. Her decision to intervene in their war has endangered everyone Alice cares about and threatens to destroy the life she’s built for herself, including her relationship with alpha werewolf Sean Maclin.

Meanwhile, Alice’s new case is the most dangerous of her career. Hired to find a missing child with a rare magical ability, she and her ghost sidekick Malcolm quickly become targets for the boy’s ruthless kidnappers. To stay alive and free from both Bell and Moses, she must rely not only on her growing powers but also her alliances with Sean’s pack and the Vampire Court.

When Alice’s conflicts with pack members turn violent and the Court betrays her, the truth becomes clear: freeing the kidnapped boy and finding her place in the pack will cost Alice her secrets, her safety, and—if she isn’t careful—her life.


Alice has been hiding from the beginning of the series and by the end of HEART OF STONE she is done hiding.

The Alice Worth series quickly became a must buy series for me and HEART OF STONE didn't disappoint. Book 4 is a bit of a roller coaster ride from beginning to end. There is quite a bit of things happening, but the flow and pace of the story was well done. There was also a ton of suspense involved and I probably ignored my kids away too much while reading HEART OF STONE.

Poor Alice and Sean can't seem to catch a break when it comes to their relationship. Just when things are going great, someone else throws a wrench into their lives. I caught on pretty quickly to what was happening, but it was still heart wrenching watching their pain.  I continue to love Sean and their relationship and it continues to grow with every installment of the series.

I love the secondary cast of characters in this series. Malcolm continues to be a favorite of mine and we are introduced to another character in HEART OF STONE that I hope continues to have a presence in the story line.

I probably shouldn't have read chapter one for the next book at the end of HEART OF STONE because now I'm DYING to know what the heck is going on. Save yourself the frustration and wait until it's closer to release to read chapter one of book 5.