UFI welcomes Author CR Robertson. Thanks for Joining us!!

I write PNR, but in my day job I am a trained geneticist who works in forensics.

Gardening. My dogs love to help me dig the holes for my new plants. I generally find them dragged out later when they decide to reposition them…

Losing myself in the characters. They become part of me for a while and I love that part of being a writer, getting into the head of someone completely different.

Nope, I sit down with my laptop and write. I don’t have a plot etc. I just write ad go where the characters take me. Sometimes people will email me and ask me what is going to happen to a character and I genuinely don’t know…

How would you pitch The Gaian Otherworld to someone who has not heard of it before?

This series is a fast paced adventure following the dragons, who Gaia left to protect this planet when the old gods left. They battle the krakens, who seek to raise the sea levels to claim the world as their own. Each book follows a new hero/heroine as they uncover magical gifts left by the gods to help them enter Olympus.

Can you tell us a little bit about the world that The Gaian Otherworld is set in?

The book moves between the mortal plane (earth), the underrealm (dragon’s lair), and the fae lands where the fae courts come from. I like to play on the idea that our world overlaps other energy dimensions and bring different folklore in to explain it.


Do you have a favorite scene in The Gaian Otherworld?

I loved writing the scene when Evanora finally stepped into her magic power and showed her captor and the corrupt council what true power looks like. She didn’t need to hurt or suppress anyone to establish her dominance because she wielded real power with every step and movement of her body.

I loved writing Ethan’s character from The Otherworld Chronicles. He went on the biggest journey and got away with speaking his mind. He would be the character I would have the most fun being friends with in the real world.

I have two books left to write in my dragon series, and then my readers are asking me to write one last book in the Otherworld Chronicles because they are demanding Casper gets a book – they encouraged me write Sage’s book as well!! Then I have a new series that I’m thinking about that will involved magical creatures such as reapers…

CR Robertson is a paranormal romance writer who lives in Ireland, the most magical country in the world. From an early age, she loved faerytales and mythological stories. She delved into the pages to go on an adventure with the characters, sparking a lifelong love of the literary world and story craft.

The Otherworld Chronicles started when the characters evolved in her head, constantly jumping in to tell their story until one day that nagging voice said, “Why not write their faerytale?” The rest resides in the pages of the Otherworld. Her in-depth knowledge of mythology and faerylore weaves the background for the characters in each of her manuscripts.

It may be cliché, but she has a cottage by the sea on the east coast of Ireland. Gardening is one of her favourite pastimes and is evident in her garden that is overflowing with crystals and seasonal flowers for the birds, butterflies, and her favourite bumblebees. Her dogs enjoy the sleepy seaside town and spend their time playing in the sea. 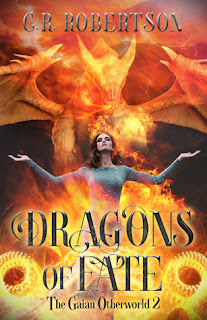 
Sometimes love is the most powerful and dangerous magic...

The underrealm was in turmoil with revelations of the evil that had taken root there.

It was no longer a safe haven for the Gaians.

Darius was a golden warrior dragon from an ancient clan. Evanora descended from the purple dragons of healing. They were destined to become fated mates four hundred years ago before Evanora was stolen from the heartland of the dragons.

Her dream of escape became the nightmare of reality.

Even in the light the past haunted her present.

Evanora’s soul was broken by her long years in captivity, until Darius started to fit the pieces back together again. Some fragments no long fit, some slotted into a different position, but the woman who emerged was stronger and more powerful than anyone ever imagined – the Gaian enchantress.

Was it too late for their love?

Or would Fate intervene to light their way to the future?

Sometimes love was the most powerful and dangerous magic...

***WARNING*** Includes a deadly hero willing to fight the monsters of this world to claim his fated mate, and a heroine who powerful enough to bring the world to its knees.

Dragons of Destiny is the second in The Gaian Otherworld. It can be read as a stand-alone paranormal romance.
Excerpt #1:


I sauntered out of the room in search of Darius. If he thought he could avoid me, he would need to rethink his strategy. He was in his bedroom with his hip braced against the window frame, staring out at the ocean.
“I thought we agreed you would break the bond and leave,” he snapped without looking around.
“No, I didn’t agree to either of those things, Darius. Just because you are my mate doesn’t mean you can tell me what to do.” I sat on the end of the bed.
His back stiffened at the word mate.
“You can’t stay here.”
“I can stay anywhere you are. We share a blood link.”
That got his attention because he spun around. “I could block access to all my homes...”
I sighed and stood up, letting some of my power loose. His arms were pinned against the wall beside his head, and his feet stuck to the floor. “The problem is, Darius, that you belong to me just as I am yours. I have no intention of going anywhere.”
I stepped against him and watched as he swallowed and glanced away. He could neutralise every feature, but his body betrayed him. I ran my fingers over his chest to his waist, deliberately moving closer to sniff his mating mark on his neck.
“Definitely no nymphs or succubus scents, Darius. You’ll need to try harder if you want to make me jealous.” My breath mingled with his. “We are made from the same energy. If I am unable to stomach the thought of another lover, the same applies to you.”
I pressed myself against him, and felt his automatic reaction to my presence. I nipped his mating mark with my teeth, and his quick inhale of breath made me smile. Tracing the outline of it with my tongue, I held onto his waist as an anchor. My lips kissed a path up his neck, even as he held his head away from me. The tips of my fangs dragged against the artery that pulsed in his neck.
Sexual tension pulsed off him in waves, and my dragoness purred in contentment.
“You belong to me, Darius. Make no mistake, I will annihilate any female you try to take as a lover.” His head spun towards me, and my lips connected with his. I grabbed his head in my hands and poured every emotion that vibrated through my body into my lips.
He had always initiated our previous kisses. I needed to show him that I’d made a choice and he was the winner. I refused to let my past paralyse me anymore. Hecate wanted me to be a worthy heir to her magic. I would not allow anyone to hold me back from my fate.
Darius tried to resist me, but his dragon had other ideas. I felt him shimmer to the surface as his heat increased, gold flecks flashing across his skin. My tongue demanded entry to his mouth, because every breath of his belonged to me and vice versa.
The rest of the world faded into insignificance, my only focus the man in front of me. He struggled against the invisible restraints that held him, his dragon trying to get closer to his mate. I dropped my hands from his face and pressed one last kiss on his lips.
“You are mine, Darius. That is as true now as it was four hundred years ago. You can ignore me and leave a room when I enter it, but it will not change the fact that we belong together.”
I turned and walked towards the door, releasing his restraints.
My lips spread into a smile when I heard him screaming FUCK into the empty room.
Darius had spent his whole life being in charge, but I was the Gaian Enchantress, and I would no longer let my life be stolen away from me. The time had arrived for me to take what was mine.