Guest Blog & Giveaway: To the Fifth Power by Shirin Dubbin

UFI welcomes Shirin Dubbin Author of To the Fifth Power. Thanks for Joining us!!

Confessions to the Fifth Power - Part Four, Whatever I Have to Do


There’s something about a confession that really gets us going. If someone tells us they have a secret we automatically lean in, and our hearts start to pound. What will they say? Will it be sexy? Scary? Scandalous? We have to know. And we love confessions most when nobody knows the truth but us.


Some of us are ruthless when pushed. Oh, we’re good people. We adore and are adored. We’re willing to go out of our way to help others. But the moment someone we love is threatened or something we want is taken away, a whole other side comes out. And that hidden side of us is willing to do whatever it takes.


With that in mind I thought it’d be fun to see what secrets Zola and Fort, the heroine and hero of TO THE FIFTH POWER, might reveal before the story begins. There are four secret sessions in total. Without question all four are sexy, scary, and juicy—like Fort and Zola themselves.


And now, this is the last confession:


Zola hesitates in the entryway of the Institute. Hey steely gray eyes dart to the outside and back to me. Snatching the pen from my hand, she boldly signs the release forms as though she’s sane. She’s not. Instead she pretends to be ready to go, but I have the power of empathy. Her emotions churn in a dark void of confusion. She can’t trick me. Finding the strength to walk out the door takes everything she has.


She does it anyway. Without another glance at me. Her heels click across the stone floors and her grey tweed encased hips sway through the revolving door as she moves out to the waiting chauffeured sedan. No sweat. No Fuss. At least on the outside. That’s why I’m letting her go.


I can’t get what I want with her in this fractured state of mind. Therefore I have to change the game.


I feel no guilt. No hesitation. There are things I must accomplish. Things that might make this woman I can’t resist hate me. Regardless, I won’t be stopped.


Perhaps when my plans have ended, and if she forgives me, she'll allow me to touch her, to make love to her until she writhes mindless beneath me. I want to hear my name breathless on her lips. Fuck it. I want it all, my job, to be a legend in my field, and Zola Noite—every part of her.


To have all that, I’ll do whatever I have to do.

Shirin Dubbin is often called a “chic geek,” and she likes the sound of it. Especially since she’s a closet wallflower (albeit one with a fabulous alter ego).When not working in graphic design or hosting The Fantastic Forum—a celebration of comics & speculative fiction—she writes stories inspired by the art, literature, international cinema, and anime she grew up with.

In her own storytelling, Shirin spins tales of sci-fi and urban fantasy with romantic edge. The battle between good and evil, humor, and break neck action are ink to her imagination. 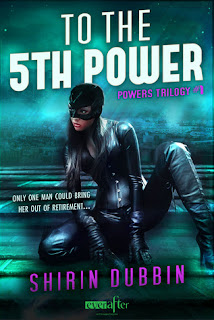 To the Fifth Power
Powers #1

Three years ago, Zola Noite's nemesis killed her sidekick and forced her to watch. The guilt drove her to hang up her cape. Zola knows one thing for certain. She will never be a superhero again.

Psychologist Dr. Arturo "Fort" Forte specializes in super-powered mental health. He’s the only reason Zola can once again call herself sane—although, truth be told, the heat between them is slowly driving her back to mad.

When three mega-villains escape the prison Fort oversees, all Zola's best laid plans go up in flames. Fort asks her for help, and she can't turn down the man she's secretly come to love. As battles ensue and clues add up, the one thing Zola trusts is called into question: Fort's true agenda and which side he’s on.