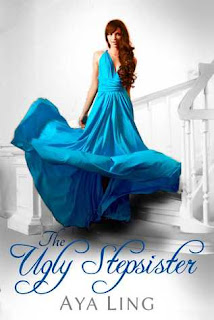 
When Kat accidentally rips apart an old picture book, she's magically transported into the world of Cinderella--as Katriona, one of the ugly stepsisters! Life turns upside down now that she’s a highborn lady and must learn how to survive the social season, including how to get through the door in a huge metal hoop skirt. To get back, she'll have to complete the story, right to the end of happily ever after. But the odds are huge: the other stepsister is drop-dead gorgeous, the fairy godmother is nowhere to be found, and the prince, despite being insanely hot, openly dislikes balls. Can she ever return to the modern world?


I honestly still think about THE UGLY STEPSISTER days after reading it. It was so fun to read a whole new take on Cinderella.

Kat LOVES to read and when her old picture book rips apart in her hands she is forced to play out a story and make sure she gets the characters to the end. She is cast in the role of one of the ugly stepsisters, but she is anything but ugly. She is a bit of a clutz, but she is very loyal and caring. She doesn't like how some of her new friends are treated and fights for them. She has an instant connection with the prince, but really wants to go home and she knows he is supposed to be with Cinderella.

I really enjoyed all the struggles that Kat found herself in. Because she is from a different time she has a whole new way of thinking and it really made her character stick out. The romance between her and Prince Edward was sweet, but not overly done. I enjoyed the supporting cast of characters and was rooting for them all to get their happily ever afters too.

I did have one issue with THE UGLY STEPSISTER, I didn't love the ending. I hated that there really wasn't a happily ever after in the larger sense. I don't want to go to much into it because that would spoil it, but I was hoping for more when the story part of the story ended. Would I read it again? Oh yea, I so want to see a movie about the ugly stepsister now.