UFI welcomes Christina Henry Author of the Black Wing Series. Thanks for Joining us!!

I don’t consider myself a professional monster hunter. However, since I discovered I wasn’t just an Agent of Death but the daughter of a fallen angel and the many-greats granddaughter of Lucifer it does seem like monsters keep crossing my path with depressing regularity. While all of them haunt me, some seem to give me nightmares than others. Here are the ones that just won’t leave me alone even though they’ve met their bitter end – or if they haven’t yet, I’m working on it.

10) Ariell – OK, so you may not think a lunatic rogue angel is very scary, but she bore a kid from a nephilim on purpose and then used that kid to loose said nephilim on the world. I find that extremely scary. I didn’t actually kill her. I weakened her with lightning bolts and then the aforementioned nephilim tore her in half and ate her. So this is only partly on me.

9) Giant Spiders – I do not like spiders. Let me repeat – I. Do. Not. Like. Spiders. Sometimes I’ve used a sword and sometimes I’ve used fire, but if you are an oversized arachnid you’d better get out of my way because all those wriggling legs are creepy.

8) The giant squishy tentacly thing in Amarantha’s forest. It probably has a name but I didn’t learn it before I set it on fire.

7) The reptile-mammalian thing in the cave on the edge of Amarantha’s kingdom. She had a whole lot of nameless yuck in that place. This thing wanted to cocoon and eat us, so I stabbed it in the eye, which seemed like a good idea at the time.

6) Titania and Amarantha – Both Queens of Faerie. Both way more trouble than they were worth. I really didn’t want to kill either of them, but they decided to take offense at everything I did and forced me to, uh, end their respective reigns.

5) Lucifer – Hmm, let’s see? He made me his Hound of the Hunt so that I’m always at his beck and call. He’s twisted every traumatizing event in my life to his advantage, and he’s after my unborn child. Definitely a monster, even if he is my grandfather. I haven’t managed to get rid of him yet, although not for lack of trying.

4) Puck – He doesn’t present as a monster, but anybody who would manipulate his own niece into a) destroying a whole species and b) killing his worst enemy for his own selfish purpose qualifies as a monster in my book. Again, still hanging around even though he’s not wanted. It’s apparently very difficult to dispose of these ancient beings without blowing up the entire universe.

3) Azazel – He spent the majority of my life as my deadbeat dad, and then he created
a serum that let vampires walk in the sun and loosed them on the city where I live. He also did something so unforgiveable I can hardly speak of it. Not much of a father, really, so I reversed the spell he was trying to use to crush my heart and crushed his instead. I’m starting to realize this list sounds a little bloodthirsty – and that it’s full of people who are related to me.

2) Ramuell – He ate my mother’s soul. Enough said, right? I exposed him to the light of the sun and he kind of…melted.

1) The Maze – There is nothing worse than an invisible entity that knows all your worse nightmares. I didn’t actually kill it, unfortunately. I just didn’t succumb to it in the battle of wills that it called a game. I survived, though. That’s a win in my book.

Christina was born in New York and now lives on the North Side of Chicago with her husband and son. She sees no conflict in rooting for both the Yankees and the Cubs.

She also enjoys running long distances, eating large quantities of cinnamon rolls, reading anything she can get her hands on and watching movies with zombies, samurai and/or subtitles. 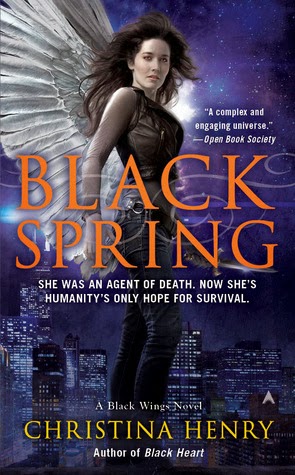 
US only, no PO Boxes
a Rafflecopter giveaway
Posted by StacyUFI at 3:00 AM 6 comments: