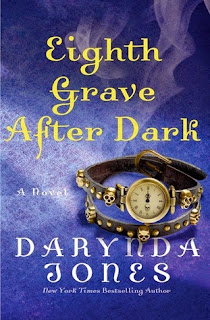 
With twelve hellhounds after her, pregnant Charley Davidson takes refuge at the only place she thinks they can’t get to her: the grounds of an abandoned convent. But after months of being cooped up there, Charley is ready to pop. Both metaphorically and literally since she is now roughly the size of a beached whale. Fortunately, a new case has captured her attention, one that involves a murder on the very grounds the team has taken shelter upon. A decades-old murder of the newly-vowed nun she keeps seeing in the shadows is almost enough to pull her out of her doldrums.

Charley’s been forbidden to step foot off the sacred grounds. While the angry hellhounds can’t traverse the consecrated soil, they can lurk just beyond its borders. They have the entire team on edge, especially Reyes. And if Charley didn’t know better, she would swear Reyes is getting sick. He grows hotter with every moment that passes, his heat scorching across her skin every time he’s near, but naturally he swears he’s fine.

While the team searches for clues on the Twelve, Charley just wants answers and is powerless to get them. But the mass of friends they’ve accrued helps. They convince her even more that everyone in her recent life has somehow been drawn to her, as though they were a part of a bigger picture all along. But the good feelings don’t last for long because Charley is about to get the surprise of her crazy, mixed-up, supernatural life….

Devastated.. I am absolutely devastated that I will have to wait so long for book 9.

My emotions are up and down after reading EIGHTH GRAVE AFTER DARK and I am having a real hard time writing this review because to tell you why they are all over the place, I would have to give away spoilers, and I really don't want to do that. SO, please know that I will try to make as much sense as possible without spoiling anything, but somethings you might not get until you read the book.

EIGHTH GRAVE AFTER DARK was a bit slower than previous books in the series, but it was still an essential addition to the series. There are a lot of surprises and answers revealed. We get to witness Charley at the end of her pregnancy and the birth of Beep. All of our favorite and not so favorite characters are present and involved in different ways. I wish Charley and Reyes would finally trust each other. They have the love down, but they continue to hide things and get the other upset on a regular basis.

The pre-ending was the part of the book that left my emotions all over the place. In hindsight I know the events that took place were necessary, but as a mother I HATE when books do this. HATE it. It usually tends to ruin them for me, but I love this series so much I can't not read them anymore so I have to try and look past it and hope that it doesn't last long, because I just won't be able to take it if it does. NOW the events that took place AFTER the pre-ending, UGGH NOOOOO, not a total cliffhanger, but close enough. Ok I will stop confusing you now. THE DIRT ON NINTH GRAVE has a release date of January 5, 2016 and that seems so far away.