Review: Mark of the Moon by Beth Dranoff 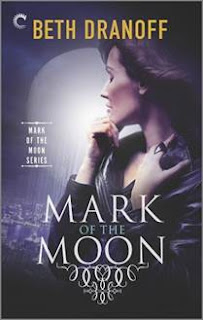 
n this first book in a wildly addictive new series, a battle begins and one kick-ass female bartender turned demon fighter is ready for war

I'm Dana Markovitz. And my world is shifting.

My experience with the paranormal community was a good one, pouring shots in the creature-friendly pit stop where I tend bar. Until last night.

A hookup with a vampire ended in a scratch from a jealous were-cat. Surprise! I caught a cat-shifting virus. I should be immune. Or so I've always been led to believe.

For some reason the infection has riled a demon underworld that apparently knows more about my secret past than I do. They aren't thrilled with me. In fact, they want me dead.

At least I have one normal male on my side. Relatively normal. I think he's on my side.

Tell you one thing. There's no way I'm being put down like a feral stray. I may not know who to trust, but I'll be damned if I'm not fighting back. Hell, my claws are already starting to show.


MARK OF THE MOON was.....all over the place. From the characters to the plot, I really had to stretch my imagination to even remotely believe what was happening.

The love triangle was a bit annoying, but the sex scenes were pretty hot. I don't feel that we got enough information half the time. I mean Dana is passing out constantly and when she passes out not only does SHE not know what is going on, but us as the reader are also left in the dark. It made it very hard to connect to the story.

I was able to finish MARK OF THE MOON, but it wasn't for me and I have no interest in continuing the series.