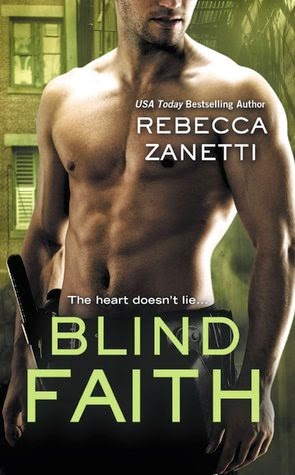 
OH OH another Sin Brother, here we go. Nate was very much in love with Audrey when he was younger but she broke his heart when she left him. Many years later he plans to use her to help save him and his brothers. Little does he realize that he isn't going to let her escape him this time. Audrey left Nate to save him but she has no want for any other and when he walks back into her life she has a hard time keeping her distance.

I don't know what it is about this series but once you start reading you just cant seem to put the books down. BLIND FAITH was no different. The romance aspect of the story was deep and emotion filled. The action was intense and had me on the edge of my seat, and the way the brothers care for each other and the women they love makes me swoon every time I think of them. In addition to another couple being formed we get a great new addition to the family in the form of an adopted Grandpa. He seriously stole my heart and I can't wait to see him in future books.

There is only one more brother left so I am sad to assume that the series will soon be ending but I have loved the ride so far so I will savor it to the very end. This series is definitely one for the bookshelf.