UFI welcomes Sarah Beth Durst on her tour for Vessel. Thanks for Joining us!!


Coffee or Tea
Neither.  Unless it's coffee ice cream.  Or tea with so much sugar and milk that it drowns out the taste of the tea.

Angels or Demons
Angels.  Demons come with too many "issues."

Pizza or Pasta
Both.  But if I had to choose... pizza.  I could eat pizza for every meal and be happy.

Werewolves or Vampires
Werewolves.  They're more snuggly.  Also, I'm not good around blood.  I close my eyes when I have to have blood drawn, so I think I'd make a lousy vampire friend and even worse vampire.

Coke or Pepsi
Coke.  Pepsi is too sugary.  Plus gotta love a beverage beloved by polar bears.

Reading or Writing
Writing.  Reading makes me happy, but writing feeds my soul. 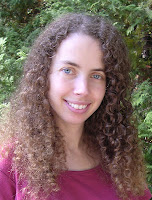 Sarah Beth Durst is the author of young adult novels Vessel, Drink, Slay, Love, Enchanted Ivy, and Ice from Simon & Schuster, as well as middle grade novels Into the Wild and Out of the Wild from Penguin Young Readers. She has twice been a finalist for SFWA's Andre Norton Award, for both Ice and Into the Wild.

Sarah was born in Massachusetts as Sarah Angelini and grew up in Northboro, a small town in central Mass that later became the setting for her debut novel.

At the age of ten, she decided she wanted to be a writer. (Before that, she wanted to be Wonder Woman, except with real flying ability instead of an invisible jet. She also would have accepted a career as a unicorn princess.) And she began writing fantasy stories.

She attended Princeton University, where she spent four years studying English, writing about dragons, and wondering what the campus gargoyles would say if they could talk. 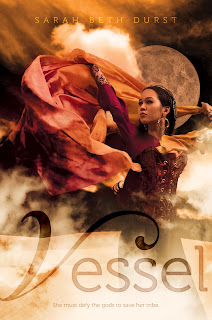 
In a desert world of sandstorms and sand-wolves, a teen girl must defy the gods to save her tribe in this mystical, atmospheric tale from the author of Drink, Slay, Love.Liyana has trained her entire life to be the vessel of a goddess. The goddess will inhabit Liyana’s body and use magic to bring rain to the desert. But Liyana’s goddess never comes. Abandoned by her angry tribe, Liyana expects to die in the desert. Until a boy walks out of the dust in search of her.

Korbyn is a god inside his vessel, and a trickster god at that. He tells Liyana that five other gods are missing, and they set off across the desert in search of the other vessels. For the desert tribes cannot survive without the magic of their gods. But the journey is dangerous, even with a god’s help. And not everyone is willing to believe the trickster god’s tale.

The closer she grows to Korbyn, the less Liyana wants to disappear to make way for her goddess. But she has no choice: She must die for her tribe to live. Unless a trickster god can help her to trick fate—or a human girl can muster some magic of her own.